Who wins in the cloud price wars? 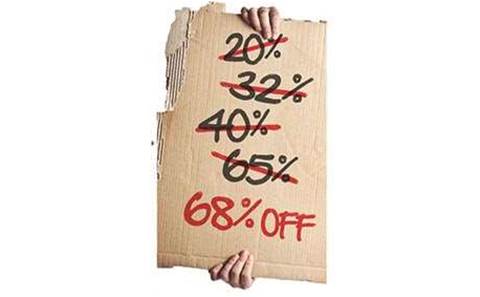 In case you haven’t heard, the cloud price war everyone has been expecting to happen has finally begun. Google, Amazon Web Services and Microsoft all dramatically cut the cost of cloud-based servers, storage and other services in late March; and they’re expected to continue cutting prices over time as they learn how to run cloud data centres with ever-increasing efficiency.

This latest round of price cuts was notable for both the size of the cuts and the narrow time frame in which they took place. First, Google cut pricing for its Compute Engine infrastructure-as-a-service by 32 percent and storage by 68 percent for most users. A day later, AWS slashed pricing for its cloud servers by up to 40 percent and cloud storage by up to 65 percent. A few days after that, Microsoft said it was introducing a new entry-level cloud server offering that would be up to 27 percent cheaper than its current lowest service tier.

Across partners that work in the cloud sector, the price cuts are deemed a positive development because they’re likely to get more organisations purchasing IT services in the cloud and even putting more of their business operations there. But while partners that work with Google, Amazon and Microsoft agree that pricing is important, many say the real battle in the cloud is for differentiation.

“We will find out soon enough [whether Amazon’s edge is price] now that Google and Microsoft are getting into the cloud war. But no, the problem that any competitor to AWS has is that Amazon has a services platform, whereas right now the other competitors mainly have an IaaS offering,” says Bjoern Schliebitz, co-founder and managing director of Australian Agile development specialists PanthaCorp.

While price cuts and unique pricing models are part of that, they’re not the only part. According to partners that work with the three vendors, the cloud game is going to be more about offering features and technologies that competitors can’t mimic, and the ability to run cloud services with a minimum of downtime.

Google is setting its cloud apart from the competition by digging deep into its well of technical know-how, which isn’t surprising considering the strength of Google’s line-up of star engineers.

At a cloud event in late March, the very first feature Google demonstrated was “live migration”, which allows a running virtual machine to be moved from one physical server to another without shutting it down. This is a poentially useful system when organisations need to maintain servers or upgrade them.

Microsoft also offers live migration, but Amazon doesn’t. VMware was first to introduce live migration way back in 2003, so Google was likely aiming to show enterprises that its cloud supports this key feature.

This includes things such as Prediction APIs, Translation APIs and Big Query. Andromeda, the codename for Google’s network virtualisation technology, which began rolling out in two of the vendor’s four regions in the US and Europe earlier this month, is another example.

Despite Google’s tech appeal, Google App Engine hasn’t had the traction that one would expect in the marketplace for IaaS. AWS has become for resellers the platform of choice due to the independence of their offering.

“Both partners [Google and Amazon] are valuable, for sure. But there are certain things AWS does that Google doesn’t. We haven’t been able to find a way to spin up our Microsoft stack in the Google data centre,” says one reseller with ties to both vendors, who requested anonymity to protect relationships.

Google’s creativity with pricing models indicates it is playing a long game. Not only does Google charge for its Compute Engine infrastructure-as-a-service on a per-minute basis, it now also has “sustained-use discounts”. Under this new model, when a customer uses a virtual machine on Google’s cloud for more than 25 percent of a month, the price they pay starts dropping. And the longer the VM runs, the bigger the discount gets.

“We want to reward you automatically for sustained usage without pre-planning. We’re moving the burden of planning from you to us,” Urs Holzle, senior vice president of technical infrastructure at Google, said at a company event towards the end of March.

One Google drawback is that it is currently only running in four regions worldwide – two in Europe and two in the US. Windows virtual machine support is still in beta. But Google is definitely looking to make cloud the second main pillar of its business, and while it’s taken a while for it to get into the game, its vast expertise suggests it’ll be able to quickly get up to speed.

Mobility: ace in the hole

Microsoft, at the same time as it’s engaging in a price war, is port-raying its cloud as more enterprise-ready than rival offerings. Microsoft says 57 percent of Fortune 500 firms are now using Azure, either for platform-as-a-service or IaaS, and it is adding new features and services to keep the ball rolling.

Microsoft is more focused on developing innovative, high-quality services than it is on keeping up with the latest cloud server and storage price cuts, Steven Martin, Microsoft’s general manager for Azure, said in a blog post in late March.

“Vendors will ultimately extol their track records for building and running services far more than their prices and SLAs,” Martin wrote.

While Microsoft is still a distant third to Apple and Google in the mobile device space, Azure is emerging as a cloud that can connect to and provide services for all types of mobile devices.

One example is Azure Mobile Services: its cloud back-end for mobile apps that can handle storage, authentication and push notifications for iOS and Android apps, which launched last June.

“InTune is a super-important product,” says Nick Sone, general manager of Sydney-based Ensyst. “It allows customers to manage mobility in a per-user way. Microsoft has thought about the cloud strategy from Azure and the cloud all the way down to the devices and the desktop. That’s what the customers are after – whether mobile, PC or tablet, they need a consistent end-user experience.”

This year at its Build conference, Microsoft introduced several new features for mobile developers, including single sign-on with Active Directory, offline data sync and remote debugging. Microsoft also released a software development kit for developers to use to integrate Active Directory with iOS and Android apps.

Azure’s breadth of supported developer tools, and particularly the ease with which Microsoft developers can make the transition to building apps for the cloud, is another important advantage, according to partners.

So despite Microsoft’s late start on the mobile device side, Azure could be its ace in the hole. If Microsoft can get millions of iOS and Android devices and apps using Azure for backend services, that would put it in the proverbial catbird’s seat, according to partners.

“Active Directory is a key part of what happens in almost all customers’ environments,” says Sone. To run that natively out of Azure is highly important and it will give a robust and consistent delivery of the service. If it costs next to nothing but it’s not consistent or stable then that’s not desirable.”

When it comes to pricing, Microsoft has yet to do much experimentation. It charges for Azure on a per-hour basis but calculates partial-hour charges on a per-minute basis, which means customers only pay for what they use. Microsoft has also vowed to keep pace with Amazon’s price cuts, though it hasn’t said whether it intends to do the same with Google’s.

Microsoft currently runs Azure in 10 regions worldwide, and has revealed plans to open two new regions in Australia, two in China in conjunction with local partner 21Vianet, and one new region in Brazil, which will give it a total of 16 global regions.

Amazon Web Services is the top dog in IaaS, having carved out quite the dominant position since opening up shop in 2006. Frankly, it’s not even much of a competition at this stage: according to research firm Gartner, AWS customers are using five times the compute capacity of the 14 other cloud vendors in its Magic Quadrant, on a combined basis.

While AWS has been steadily adding new cloud services aimed at disrupting what it likes to call “old guard” enterprise software vendors, it also has been the most aggressive of the three vendors when it comes to pricing.

“We’ve lowered pricing 42 times in the last seven years. And most of the time when we’ve done that, it has been in the absence of any competitive pressure to do so,” Adam Selipsky, vice president of sales, marketing and product management at AWS, told CRN US in an interview at the AWS Summit in San Francisco last month.

That said, AWS charges by the hour and does not currently offer per-minute pricing, which means a customer with 61 minutes of usage time on a VM will pay for two hours. But AWS does offer “spot instances,” in which customers are allowed to sell their unused server capacity to other customers in an online marketplace.

Google’s sustained-use discounts could be attractive to customers that don’t want to be forced to predict how much cloud capacity they will use beforehand, which is required for the “reserved instances” that AWS and Microsoft offer.

But pricing isn’t the only selling point for AWS. Richard Steven, director of Brisban-based ITOC, says AWS’s pace of innovation and the number of marquee services is “just mindblowing”.

“Keeping up with it is difficult as a partner. Instead of guys running around data centres, it’s all code based. That’s very powerful. We’re encouraging people to move away from undifferentiated workloads and building products on top of the Amazon platform,” Steven says.

With 26 availability zones worldwide, AWS has achieved a level of scale and reliability that competitors will have a tough time matching.

“Amazon has tens and tens of services. Email sending, workflow, transcoding, databases as a service, big data, data warehousing as a service – there are so many platforms as a service in the one product,” Steven says. “You can build a whole data centre just from Amazon product stacks.”

Regardless of which vendor dominates the cloud-services market, ultimately it is the solution providers, integrators, customers and consumers that will win as a result of the price war.

Despite Amazon’s huge head start, some partners think there’s plenty of time to catch up.

“We’re finding that compared with other public cloud providers, Microsoft has an advantage. The apps that customers want to run are also [made by] Microsoft, and there’s very good native integration between Azure and the Microsoft productivity platform,” says Sone. “That’s what we’ve had huge success selling in the past couple of years.”

Sone also tips the native version of SQL datbase in Azure’s public cloud as an example of integration that no other competitor can offer.