Why my smartwatch lives on my wrist... and my Google Glass lives in my drawer 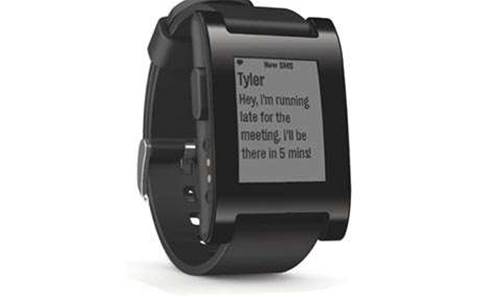 I finished watching a movie called Her last night. It’s about a lonely guy who falls in love with an intelligent computer operating system with a female voice and personality. Her is the first example of a movie I have seen that lays out a vision for how wearables could become pervasive.

In Her, there are three elements to the wearable tech: the first is an earpiece; think of this as a glorified Bluetooth headset that sits within the ear canal. The second is a smart-phone-style device that lives in your pocket. And the third is a ‘smart assistant’, something like Siri.

The three elements work together in tandem. The smart assistant talks to you through the earpiece, and if she wants to show you something, she displays it on the smartphone in your pocket. It’s this combination of sensors that will, I think, be the way of the future for wearables: smart devices that interact with each other and provide valuable information with relevance and context.

Relevance is the key and it’s what most wearable technology lacks today.

Two good examples of wearable technology that have emerged over the past 12 months are Google Glass and Pebble Smartwatch. Their beginnings couldn’t be more different.

Glass comes from Google, a company with effectively unlimited resources. It leverages a branch of Android OS and uses a combination of touch and voice recognition as inputs. Glass sits intrusively on a user’s face, battery life is poor, and when the little Glass display that sits to the right of your vision is off, Glass serves no useful purpose.

Contrast this to the Pebble Smartwatch, which was born as a KickStarter campaign. Pebble’s campaign was one of the most heavily subscribed and popular campaigns ever, raising $10 million.

I own both Glass and Pebble and the Glass lives in my drawer while the Pebble lives on my wrist. Pebble pairs with your iPhone or Android device and provides on-wrist notifications. This, in itself, is particularly useful, and means that you can leave your smartphone in your pocket and get notifications very unobtrusively.

Pebble recently provided a software upgrade that also gives Pebble the ability to run apps downloaded via a Pebble app store on your smartphone.

My business, Outware Mobile, has been fortunate enough to work on a couple of wearable projects. The first was to create a version of the popula≠r ‘AFL Live’ app that we developed, and reimagine it for Pebble.

‘AFL Live’ for Pebble is an amazing app because it provides a truly new interaction model for getting AFL scores. The app runs unobtrusively on your wrist. With a quick glance you can check the current footy score, or opt to enable the vibrate-on-goal feature that makes watch vibrate when a team scores a goal.

The second wearables project was for Google Glass. We challenged our team to develop a version of our popular ‘Snap Send Solve’ council reporting app for Glass. Our team got it done in under 48 hours.

Both of these projects illustrate just opportunities for apps on wearables, but many wonder whether the market is big enough for businesses to fully invest in development.

According to the research report from Markets And Markets, the global wearable electronics market was worth more than $2.5 billion in revenue in 2012 and is expected to cross $8 billion in 2018. As it stands now today, wrist-wear accounts for the largest market revenue.

Given that Pebble and Glass are only young, it’s safe to assume that many others will rush into the market.

Google has already announced another string in its wearables bow: Android Wear. And Apple are the elephant in the room with persistent rumours of an imminent entry into the smartwatch market with a focus on health and fitness.

With the demand for wearables growing rapidly, I have few doubts this market will mature over the next couple of years with major entrants driving the technology forward.

Danny Gorog is a director of Outware Mobile in Melbourne, which was third in the 2013 CRN Fast50