Why tablets will take over PCs and laptops 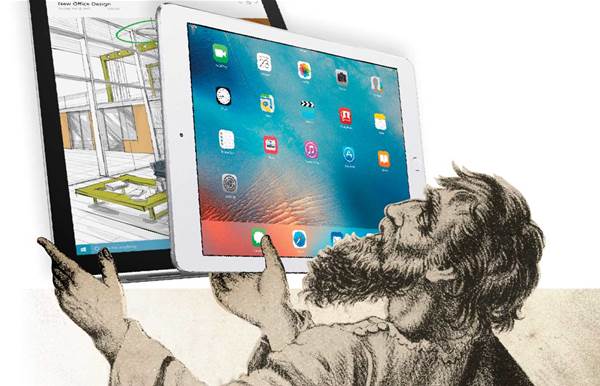 COMMENT  |  When you start looking at the pro tablet market that targets business users, it’s very difficult to understand what the hell is going on.

Let’s take a look at the numbers. They’re not good. Microsoft Surface sales have stuck at a low number for many years – less than 15 million units in half a decade.

Apple doesn’t break out the sales of iPad Pros but sales for its whole range have fallen. They peaked at US$9 billion in Q4 2014 and were just US$5.8 billion in the last reported quarter, Q4 2017.

Yet the actual users of Surface Pro and iPad Pro show that rabid fanaticism you’d expect from a top-selling device. Two managing directors in accounting software companies told me separately how much they loved their pro versions of the Surface and iPad which had effectively replaced their laptops.

The praise is similar to this comment on a recent post about Microsoft Surface:  “That device has become something truly amazing. Everything works, I consistently put it on sleep mode, and doesn’t kill my battery and wakes up in an instant. I would never go back to using any other Windows hardware.”

How ironic that the above comment came from a channel story, “2019: the year that Microsoft quits Surface hardware”.

“The Surface performance is choppy; there are good quarters and bad quarters, overall they are not making money. It doesn’t make sense for them to be in this business,” said Steve Brazier, CEO of channel analyst firm Canalys last year. “When the capital expenditure challenge that Satya Nadella has taken Microsoft down becomes visible to Wall Street, everyone will ask him, ‘Why have you gone to a low-margin business?’”

You can see the logic of this statement when Surface sales have hovered around US$1 billion and a million units (a tenth of iPad units). Compare that to cloud sales, which grew 11 percent year on year to US$7.4 billion in the fourth quarter.

The Productivity and Business Processes unit, which includes Office 365 and Dynamics, was up 21 percent to US$8.4 billion. Microsoft has a long history of successfully scaling software sales, and now cloud. Not hardware.

I’m convinced it will. Here are the signs.

Better pens  So much has changed in the past two years. Screens have improved to the point where latency with styluses has virtually disappeared (sub-20 milliseconds in the iPad Pro). Handwriting recognition has vastly improved.  Business users en masse resisted the earlier versions of stylus because they were too limited in function and feel. But the gap between pen and paper and stylus and screen is shrinking quickly.

Better interfaces  Personal assistants have come a long way. Siri and Cortana, and especially Amazon’s Alexa, are far more powerful and useful. Siri and Cortana are part of their respective operating systems. Speech recognition is today good enough to replace typing (in August Microsoft announced its error rate for conversational speech algorithm was better than professional human scribers). Once users retrain on voice commands and dictation to get to that next level of productivity they will move quickly towards lighter devices.

Better operating systems  Apple and Microsoft have spent more than five years now working out how to use touch more effectively in a lightweight, mobile OS. Apple adding a file system in iOS 11 was a big step.

Better hardware  The screens, batteries and processors keep getting better and better. You can buy a tablet with an i7 or Apple’s A10X chip and have performance equal or superior to laptops.

Better innovation  A point made by Xero MD (UK) Gary Turner – the newest ideas are turning up in iOS, not OSX. That is where Apple at least is spending its energies. If you want the latest productivity improvements then you should be doing more of your work on the mobile platforms.

In short, the hardware and software in tablets have reached tipping point. Now it’s up to the users. People need to retrain on touch and voice to understand how to get the most out of a tablet. Once companies start to educate their staff on a new way of working they will happily ditch their desktops and laptops.

When I talk to the early adopters, they’re not looking back. The early majority just needs a little push and those tablet sales will quickly start to creep up.

Will Microsoft still be in the category? I hope so. Sales may be stagnating but it’s the wrong time to quit.