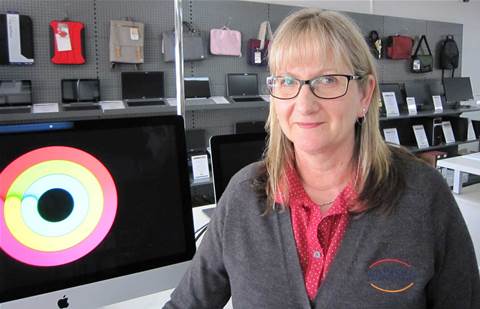 While Wimmera Office Equipment is proud of its long-time dedication to both IT and print customers, the Horsham, Victoria business knows getting new feet through the door is key to growth, and it’s rekindled an old partnership with Apple to help with just that.

The IT and office equipment supplier boasts 14 staff and offers servers, desktops, laptops and tablets, networking and services, copiers and printers and office furniture to government, corporate and retail customers.

The reseller in its current form came to be in 2002 when Bill Glenister, who started working at the office supplies dealer in 1978, and Craig Robertson, who started four years later in 1982, acquired the business from Office Everything Mildura with some fellow associates.

In 2008 Glenister and Robertson bought out their partners and invited Helen Hannan, another long-time staffer, to come on as a shareholder.

For the modern Wimmera Office Equipment, staff longevity seems to be a feature. “Nine of the 14 staff members have been with us for eight or more years. So it must be an OK place to work!” said Hannan, who started her IT career in 1985 in Melbourne at Tech Pacific. “I think we’ve been really lucky with our staff.

We’ve had people for a long time, and we’re very fortunate in that respect. Even a couple who have left have come back. One was here for almost 10 years, then left for a while, then came back. In March he’ll have been back for four years.”

The business has been a member of the Leading Edge Computers (LEC) group since 2003, which Hannan said had offered a big leg-up in getting competitive offers for the businesses’ key vendors in Canon, HP, OKI, Kyocera, Ricoh, Lenovo, and Epson.

“We would highly recommend resellers join Leading Edge Computers,” Hannan said. “You get to meet other independent business owners through their networking and you learn a lot.”

Hannan said the Leading Edge Computers group also helped their business as it sought to reestablish an old partnership with Apple.

“We had a visit from a Leading Edge Computers Support office staff member to help us with the floor plan when we were applying for the Apple brand.  We set up the eCommerce website supported, managed and supplied by LEC, which wouldn’t have happened if it was left to us to do,” Hannan said.

“The shop has come up a treat and has created a great atmosphere for our existing customers, new customers and our staff.”

Apple has returned to the regional reseller after a bit of a hiatus, previously having a partnership with Office Everything. While that arrangement was not viable to continue when the company changed hands in 2002, in 2015 the executive team saw the time was right to get the vendor back on board.

“We had said goodbye for a while so there was a little bit of resistance when they were back in vogue, but with retail a little quiet we needed something new to offer, so we thought we’d have a go at getting Apple back; that was close to three years ago,” she said.

After a couple of applications and a refurbish of the shop, Apple were back in store as of August 2017, and had been a boon for retail door traffic, Hannan said.

“We’re still doing all the other things we’ve always offered our customers but this has created a lot of interest with new customers and people who had not dealt with us previously,” she said. It’s encouraging news for the local reseller, which is enjoying its place in the sun.

“Having this type of business in our part of Australia is great,” Hannan said.

“We are able to offer our area competitive pricing, perhaps not as low as metro or online, but we have amazing local service and support and the people in our area are very good at supporting local business.”

This Regional Reseller profile was written in partnership with Leading Edge Computers. To find out how the Leading Edge Group can support your business, call 02 8732 9524 or visit www.leadingedgegroup.com.au