At a gala dinner at the Novotel Manly Pacific in Sydney, CRN Editorial Director Simon Sharwood declared a high-viz-ute-free-zone – CRN’s response to the federal election campaign in which every depiction of a business involved warehouses, factories, farms and utes.

Sharwood called on the 200-plus attendees to celebrate our industry and the impact its work has on every other Australian business, and on the wider economy. Because even if we're never depicted as the kind of businesses that make a difference, we are! Engage2, Insync Technology and Adopt & Embrace shared the Working Together category for their monster Office 365 implementation at the City of Hobart and its 600 staff. The Distribution Performance category was tough: the judges could not split Ingram Micro and Tech Data. Ingram’s program for Dell drove substantial new revenue, while Tech Data did likewise and recruited over 40 new partners for IBM. OBT took out the Workforce Empowerment category for its work at consultancy Niche Environment and Heritage, where it replaced productivity tools and changed a culture that saw staff pass up the chance to work from home, and instead come to the office in increasing numbers to enjoy the thorough tech refresh on offer. Intuit Technologies took out the Networking Evolution category, for the network it built at offshore salmon farms for Tassal. The network monitors salmon feeding pens that are more than 20km from dry land and transmits video data from around 300 remote pan and zoom cameras back to the feed centre. And it does so even in unpredictable and fierce weather conditions.

AirBridge Networks was Highly Commended in this category. Powertec took home the Evolving Innovator category, after creating a turnkey solution that can extract information from sensors on any network, for agriculture companies based on the Rayven.io platform. Cogniss took out the Emerging Innovator category for its low-code tools that allow creation of health and education apps. Cogniss aims to transform humans – it figures that once a company transforms its technology and business processes, people need some change too. Its apps facilitate that change by applying neuroscience, AI, big data, games and gamification.

GLUH was Highly Commended in this category. Xref took out the Exporting Innovation category after its reference-checking service continued its global success. The company’s wares are now used in 195 countries and in 2018 chalked up big customer wins across the Asia-Pacific, Europe and North America and even further afield.

NextTechnik was Highly Commended in this category. OBT also won the Trusted Systems category, after a security project that brought Eureka Funds Management into line with security policies of its new French owner. The OBT team worked nights to satisfy its French customer, while delivering a very complex security solution. Parallo took the Modernising Infrastructure category for its work taking the Australian Catholic University from a classic multi-vendor mess to a hyperconverged and resilient rig. Fujitsu Australia in the Digital Transformation category, for the “Digital Owl” that changed the way the New South Wales Office of Heritage and Environment gathers data on at-risk species. CustomTec was Highly Commended in this category. We also had Transpire pick up a win in the Customer Experience category for delivering a dazzling smartphone experience for visitors to the Sir John Monash Center, Australia's World War One memorial in France. Some 150 Bluetooth beacons were deployed to deliver audio and video through iOS and Android apps. A big shout out goes to all of our 2019 CRN Impact Awards finalists, whose work you can read more about here. 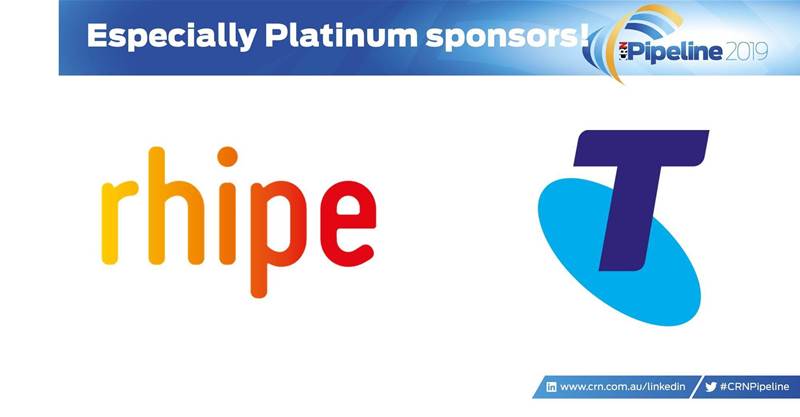 And special thanks to Platinum sponsors rhipe and Telstra.

Powertec took home the Evolving Innovator category, after creating a turnkey solution that can extract information from sensors on any network, for agriculture companies based on the Rayven.io platform.