Ten tablets that hit the mark at CES 2016

Check out which devices wowed in Vegas. 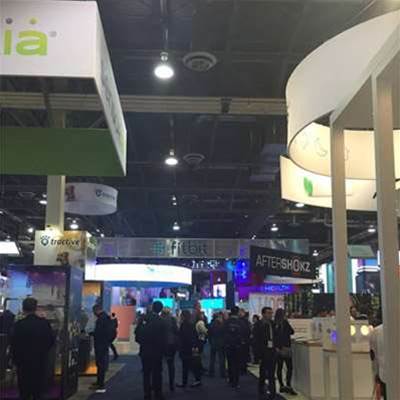 Thousands of people representing mobile service providers, vendors large and small, and just gadget-conscious consumers gathered in Las Vegas last week at CES 2016 to check out the newest, hottest mobile products stepping out into the market.

Among the shiny new devices unveiled at the giant electronics show were a lineup of tablets that pack more power, sport innovative displays and boast other flashy features from vendors like Samsung, Huawei and Lenovo. They ranged from minis to 12-inch-display models and had added attractions such as detachable keyboards, Bluetooth pens and 3-D cameras.

Here are 10 cool new tablets showed off at CES this year.

Acer used CES as a launching platform for the Iconia One 8 (B1-850), a dirt-cheap 8-inch Android tablet.

This new mini tablet, which runs Android 5.1, packs a quad-core processor and 16GB of internal storage (expandable to up to 128GB through a microSD card) and 1GB of RAM. The tablet's specs are nothing special, but are certainly indicative of its US$99.99 entry-level price tag.

Other features on Acer's tablet include 10 hours of battery life, and a suite of EZ apps (including a note-taking app and a screen-shot simplifying app). On the camera front, Acer's Iconia One 8 touts a 5-megapixel rear-facing camera and a 2-megapixel front shooter. The Iconia One 8 will be available in February. 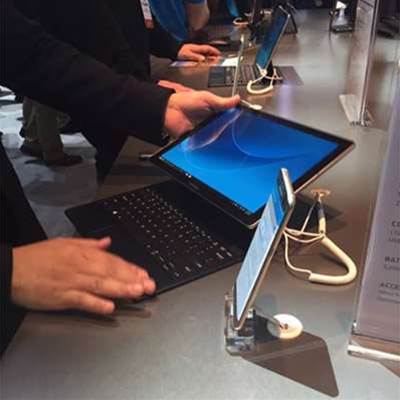 Samsung's Galaxy TabPro S, a 2-in-1 tablet running on Windows 10, made waves at CES for its striking similarities to Microsoft's Surface Book.

The 6.3 mm-thick tablet comes in the box with a full-sized keyboard cover that wraps around the device and includes a flexible hinge for dual-angle display. The TabPro S packs a sixth-generation Intel Core M processor and has a 12-inch Super AMOLED display with 2,160 by 1,440 resolution. It also features a multi-port adaptor for HDMI, USB Type A and C, and a Bluetooth pen that is available for purchase separately.

With 10 hours of battery life and 4GB of RAM, this device will be available for purchase by the end of January, and will cost around US$999. 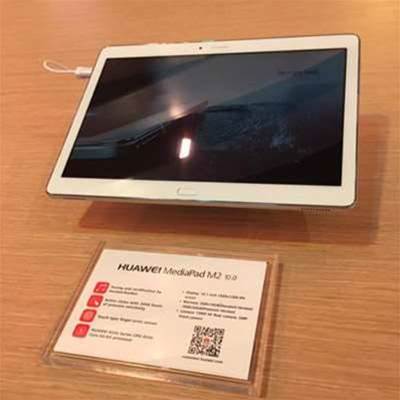 In addition to a new smartphone and wearable launching in the U.S., Huawei also announced a new Android tablet at CES, the MediaPad M2 10.0.

The MediaPad M2 is a 10-inch tablet with a 1,200 by 1,920 pixel resolution with a full-metal aluminum frame. This slim, sleek tablet features a 13-megapixel rear-facing camera and 5-megapixel front shooter.

On the inside, this tablet contains a 6,660 mAh non-removable battery and packs a Kirin 930 octa-core processor clocking 2GHz. In terms of memory and storage, the MediaPad M2 comes with 2GB of RAM and packs 16GB of internal storage (with microSD card compatibility for expanded storage). The MediaPad M2 hits the U.S. in the first quarter of 2016 and will start at US$349. 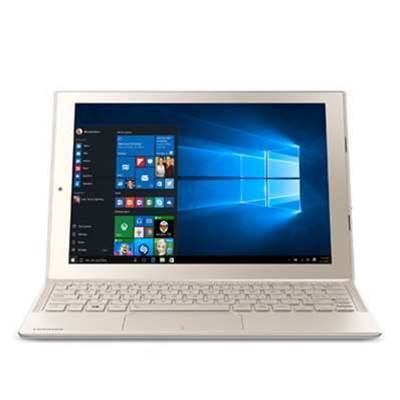 At CES, Toshiba brought out a new DynaPad 12-inch tablet that runs on Windows 10. This tablet features a full suite of business applications and a built-in stylus, the Wacom TruPen, which allows users to take notes directly on their devices.

On the outside, the DynaPad touts a TruBrite display with 1,920 by 1,280 pixel resolution and Corning Gorilla Glass 3. Within its carbon fiber body, the tablet packs an Intel Atom x5 Z8300 processor and features up to 64GB of flash storage, as well as 4GB of RAM.

Other features include an 8-megapixel rear-facing camera and 2-megapixel front-facing camera, as well as two USB 2.0 ports, a microSD card slot and a HMDI port. The DynaPad is available for preorder and will retail for US$570. 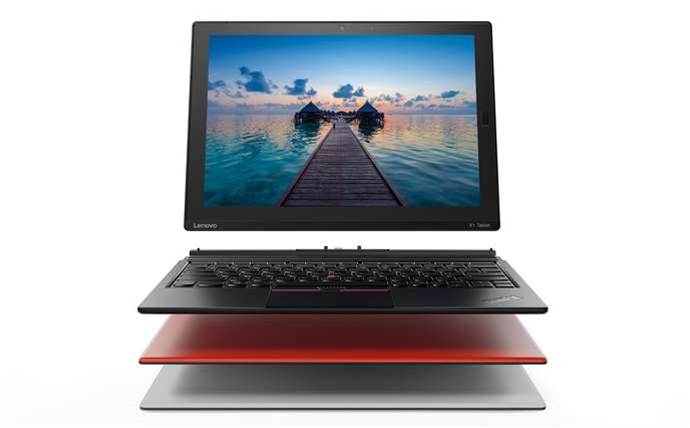 Packed with features such as a projector module, Lenovo's ThinkPad X1 was one of the cooler tablets to be unveiled at CES.

The 12-inch ThinkPad X1 tablet, which runs on Windows 10 and packs Intel's sixth-generation Core m7 chipset, can be converted into a laptop through an attachable magnetic ThinkPad keyboard and kickstand. But the tablet also attaches to other (separately sold) modules so that it can also be transformed into a 3-D camera, using Intel's RealSense camera, or a projector, enabling a 60-inch display.

The X1 tablet also features up to 16GB of RAM and a healthy array of ports, such as a USB 3.0, a USB Type-C and a mini display port, as well as microSD and Nano SIM card slots. The ThinkPad X1 will be launched in February priced at US$899. 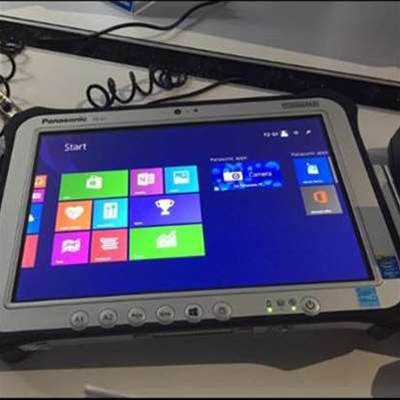 Panasonic unveiled a ruggedised tablet as part of its Toughpad lineup at CES.

The 12.5-inch tablet is geared toward point-of-sale retail and small business applications, and runs on Windows 9.1 Pro. The Toughpad features a high-definition, touch-screen display and easy-grip, ruggedised-bottom cover, as well as up to 9 hours of battery life and USB 3.0 and Micro SDxc ports. 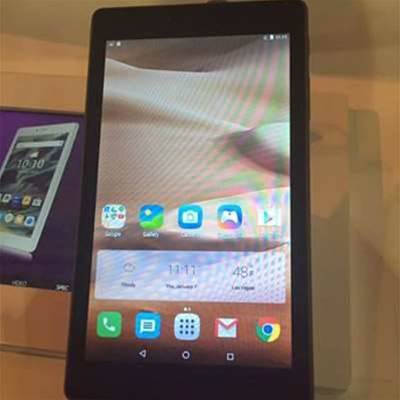 In addition to two new smartphones and a phablet, Alcatel revealed not one but two slate tablets - the Pixi 3 and Pixi 4 - at CES this year.

The 7-inch Pixi 4 runs on Android Marshmallow and packs a quad-core processor clocking 1.1GHz with 1GB of RAM. This entry-level slate includes 8GB of expandable storage and a 2,580 mAh battery. It also features a 2-megapixel rear-facing camera and 3-megapixel front shooter.

With an 8-inch display, the Pixi 3 is a bit bigger and runs on Windows 10 as opposed to Android. This tablet packs a Snapdragon 210 chip with a quad-core processor clocking 1.3GHz and 1GB of RAM. The Pixi 3 also has better 5-megapixel rear-facing and 2-megapixel front-shooting cameras and a 4,060 mAh battery. Alcatel has not revealed pricing or availability for either slate. 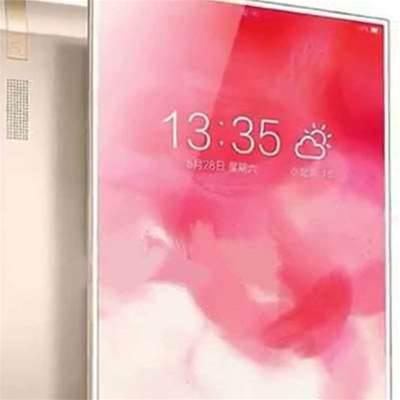 Among the tablets displayed at CES was the HiSense VIDAA Mirror, an almost bezel-less tablet with an 8.4-inch 2K IPS display with 2,560 by 1,600 resolution.

On the interior, the VIDAA Mirror packs a quad-core Rockchip processor clocking 1.8 GHz and 2GB of RAM, as well as 32GB of storage. HiSense's VIDAA Mirror, which was unveiled in November but has not been officially shown off until CES, also runs on Android 5.1 and packs a 4,580 mAh battery. There is no further word on the HiSense VIAA Mirror's pricing or availability. 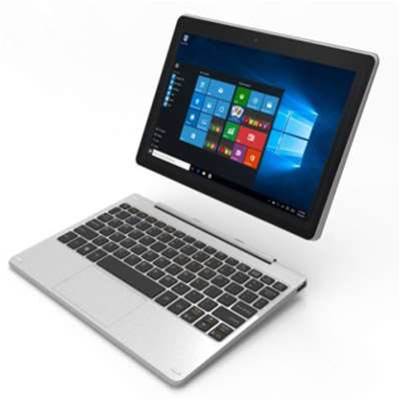 E Fun, a manufacturer of the NextBook tablet brand, revealed three new tablet models at CES - the Flexx 9A, Flexx 10A and Flexx 11A.

These three models will run Windows 10, pack a quad-core Intel Atom x5-Z8300 processor, and contain other similar features, such as removable keyboards, 2GB of memory and dual cameras. The models will differ mainly in screen size - the 9A will contain an 8.9-inch IPS display, while the 10A features a 10.1-inch, 1,280-by-800 resolution display. The 11A features an 11.6-inch touch-screen display with 644GB of internal storage (the 9A and 10A contain 32GB of internal storage). 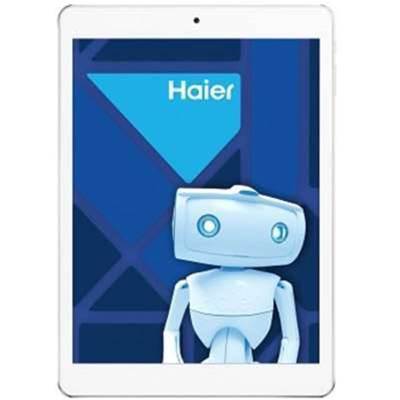 Haier brought out a 9.7-inch Android tablet at CES that is expected to be cheap -- less than US$200.

The HaierPad 971 will run on Android 5.1 and contain a quad-core Rockchip processor with a clock speed of 1.8GHz and 2GB of RAM. The tablet will contain 16GB of internal memory, expandable to 32GB with a microSD card, and will contain a non-removable 7,800 mAh battery with about 8 hours of juice.

The tablet also has a 2-megapixel front camera and an 8-megapixel rear-facing camera with autofocus, an impressive feature on tablet cameras. The availability for the HaierPad 971 has not yet been revealed.

Thousands of people representing mobile service providers, vendors large and small, and just gadget-conscious consumers gathered in Las Vegas last week at CES 2016 to check out the newest, hottest mobile products stepping out into the market.

Among the shiny new devices unveiled at the giant electronics show were a lineup of tablets that pack more power, sport innovative displays and boast other flashy features from vendors like Samsung, Huawei and Lenovo. They ranged from minis to 12-inch-display models and had added attractions such as detachable keyboards, Bluetooth pens and 3-D cameras.

Here are 10 cool new tablets showed off at CES this year. 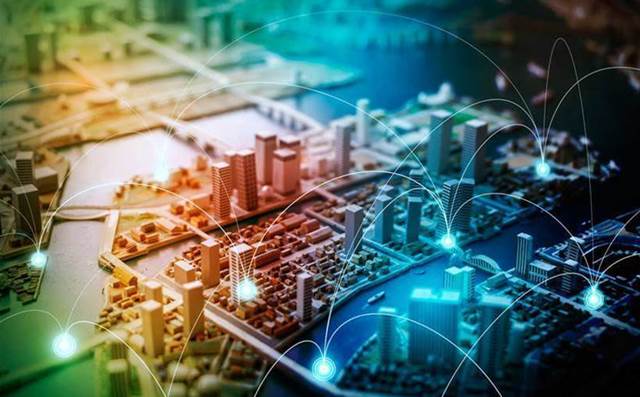 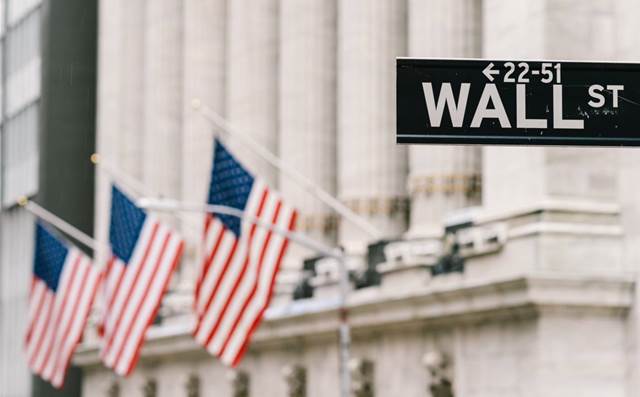 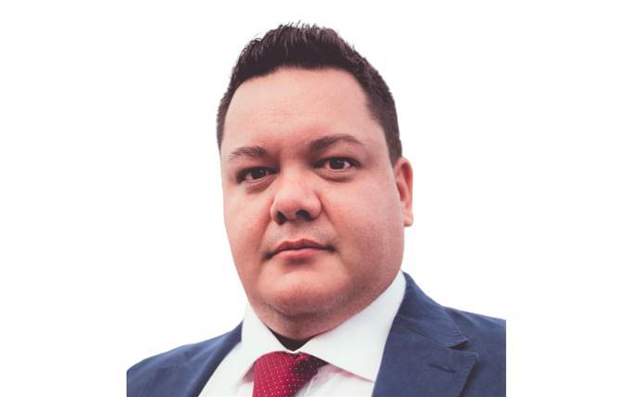