[Photos] From the latest robot dog to an AI platform for drones. 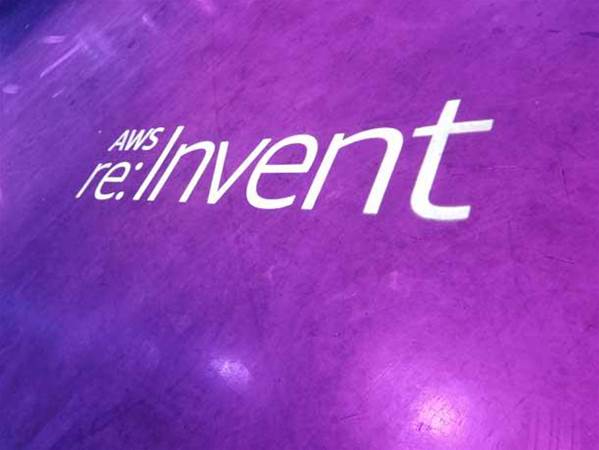 A dog-like robot that is used to inspect industrial environments, a platform to turn Java applications into microservices, and a drone that brings together artificial intelligence and 5G.

These offerings from Boston Dynamics, vFunction and Qualcomm, respectively, were among the devices and software demonstrations filling the conference floors of The Venetian Resort in Las Vegas last week for Amazon Web Services’ cloud computing-focused Re:Invent conference.

Held from Nov. 29 to Dec. 3, this year’s hybrid Re:Invent was in person and online, unlike last year’s event, which was held online only due to the pandemic. Attendees of 2021 re:Invent needed to be vaccinated against COVID-19 and masked.

Here’s a look at the products and services that stood out at this year’s re:Invent. 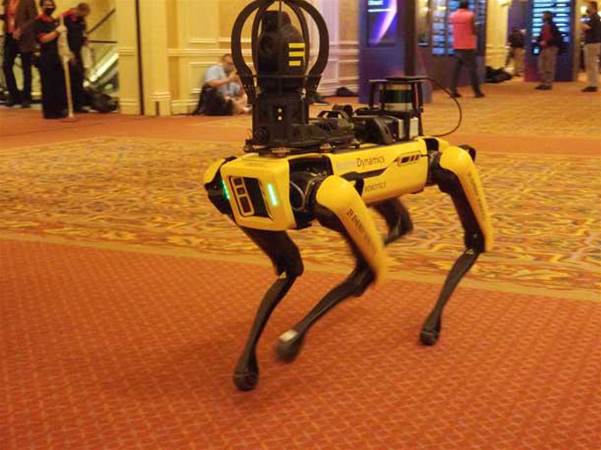 Boston Dynamics’ Spot, a mobile robot by Boston Dynamics with a software stack by Germany-based Energy Robotics, paraded around one of the floors of AWS re:Invent throughout the week.

The robot is used for autonomous inspection. It can conduct thermal and audio-visual inspections of devices in multi-floor facilities, inspect worker safety gear, notify when workers are injured, detect anomalies in equipment, inspect fluid levels in tanks by navigating narrow spaces and inspect hydropower plants in challenging terrains, according to Energy Robotics.

Spot can carry about 14kg of equipment such as thermal cameras, LiDAR and zoom cameras. The robot can semi-autonomously open doors and manipulate objects with its arm, according to Energy Robotics.

It stands at about 71cm and measures about 20cm sitting. The average battery runtime without a payload is 90 minutes, according to the company. 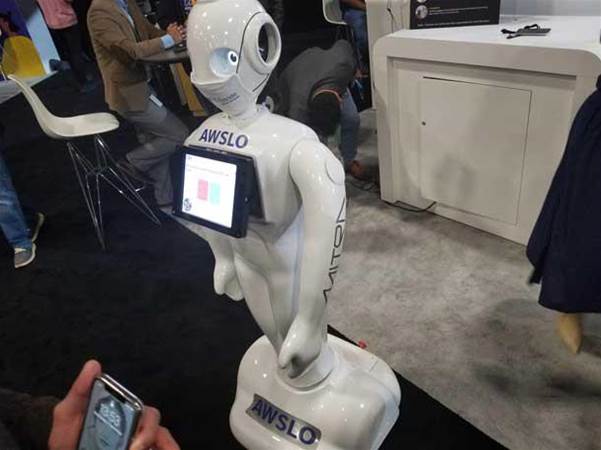 The robot was introduced by the Wipro-AWS Launch Pad, a co-innovation centre in India dedicated to cloud-based solutions, according to Wipro.

Awslo appears to be a different version of Invento Research’s Mitra robot used in non-acute senior care centres for companionship with residents and to alert staff when a resident has fallen.

Wipro is an AWS Premier Consulting Partner with 2,600-plus AWS certifications, more than 75 customers and 20-plus solutions engineered on AWS, according to Wipro. 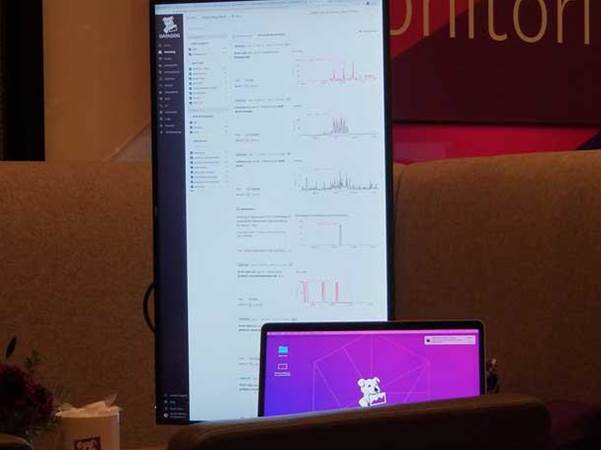 Watchdog detects potential application and infrastructure issues such as hit rate spikes. Updates from New York-based, publicly traded Datadog around Watchdog include a private beta of Watchdog RCA, a tool to automatically detect the relationships between services to speed up root cause analysis, and a new addition of Log Pattern Anomalies to the Watchdog Insights recommendation engine. 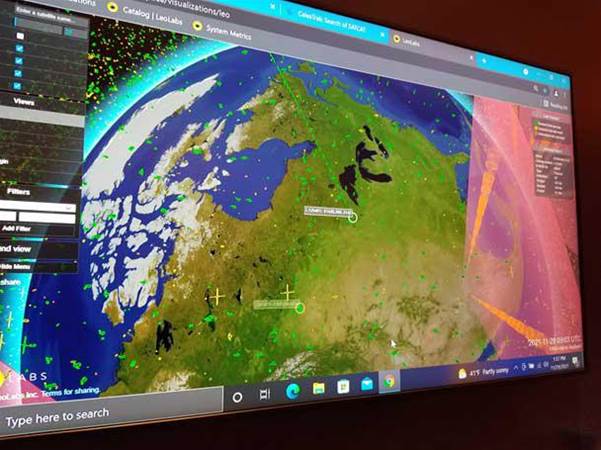 Re:Invent attendees with an interest in mapping objects in low Earth orbit likely stopped by LeoLabs’ demonstration of its platform.

The platform is meant for satellite operators, regulators, space agencies and industries relying on satellite services. The company offers automated satellite and space debris tracking in real-time, over the internet and as a subscription, according to the company.

LeoLabs’ radar network detects and tracks objects as small as 2cm, according to the company.

In June, US-based LeoLabs announced the close of a US$65 million Series B round of funding jointly led by Insight Partners and Velvet Sea Ventures. 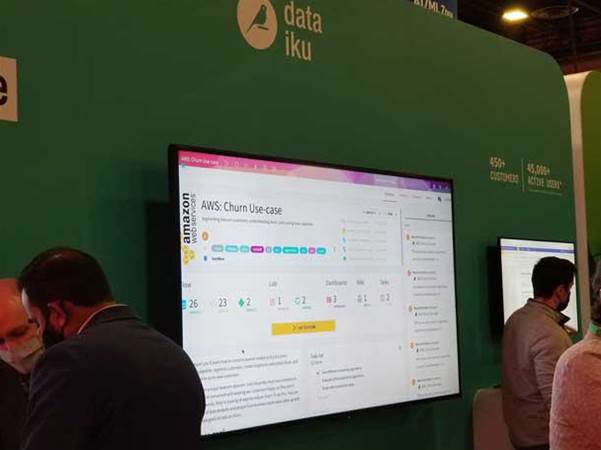 Artificial intelligence and machine learning company Dataiku showcased its platform that powers models for fraud detection, predictive maintenance and supply chain optimisation, among other use cases.

One such use case is using the platform to prevent customer churn, segmenting customers by plans and usage, pushing out more targeted advertising and contacting customers at a high risk of leaving to offer deals, according to the company.

Earlier this year, New York-based Dataiku raised US$400 million in a Series E funding round, bringing the company’s total financing to US$646.8 million. In the summer, Dataiku made its platform available for AWS Marketplace, a digital catalog for finding, testing and deploying independent software on AWS. 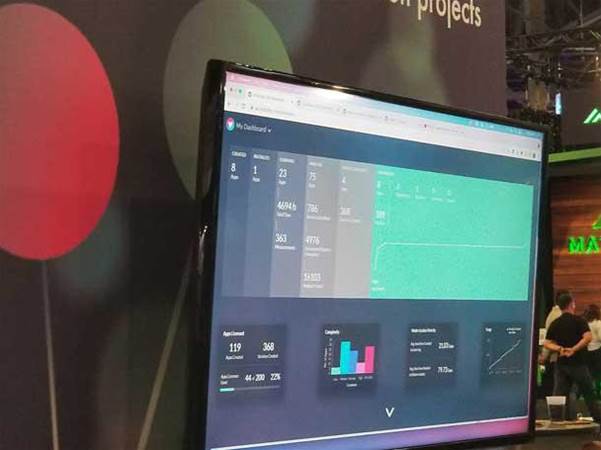 During re:Invent this week, vFunction displayed its platform for developers and architects to automatically transform Java applications into microservices available for deployment on AWS and other cloud infrastructures.

The platform aims to lower migration risk through automation and acceleration of refactoring and re-architecting legacy applications. It offers a single pane to track migration and modernisation assessment projects across an application estate.

The company unveiled a new integration with AWS Migration Hub Refactor Spaces to accelerate the modernisation and migration of Java applications to AWS.

The US-based company recently exited stealth and revealed a US$12.2 million seed funding round. 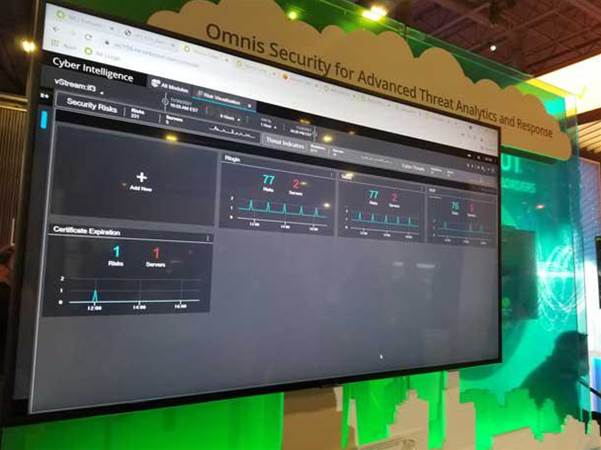 NetScout exhibited its suite of cybersecurity products during re:Invent, including its Omnis security platform for threat analytics and response and vStream virtual appliance for hybrid cloud environment visibility.

NetScout’s vStream monitors service-critical traffic within virtualised and cloud infrastructures, with the goal of decreasing mean time to repair (MTTR). vStream provides packet traffic and application workloads insight, according to the company.

The US-based publicly traded company announced this year a new integration for Omnis with AWS Security Hub to provide visibility when migrating workloads to AWS. 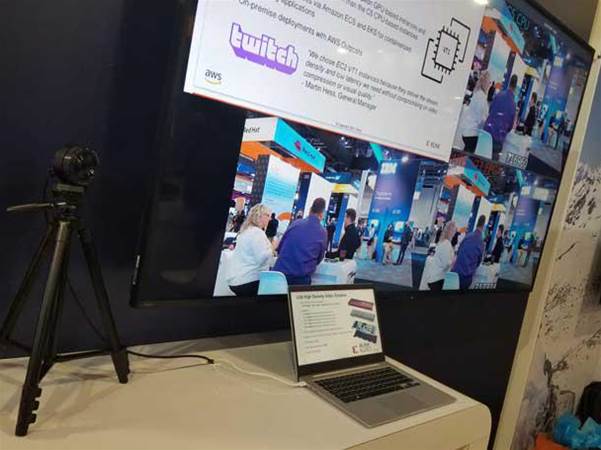 Representatives from semiconductor company Xilinx were on site at re:Invent to discuss AWS EC2 VT1 instances powered by Xilinx’s Alveo U30 media accelerators for video transcoding.

The Alveo U30 streamed video live from the show floor, transcoded it and steamed it back while reporting latency. The video was viewable in AWS as it transcoded 16 times faster than real-time, according to the company.

The offering is available for on-premises deployments with AWS Outposts. Users can launch VT1 instances with Amazon ECS and EKS for containerised transcoding applications.

The VT1 instances became generally available in September, according to AWS.

The Alveo U30 fits into a single PCIe slot. It supports up to two channels of 4kp60 video streams. A single card supports up to eight 1,080p60 streams and subdivides into lower resolutions down to 48 channels of 540p video resolution or below. The card supports H.264 and HEVC standards and operates at 25 watts a card. It can decode and encode up to 48 video streams simultaneously, according to Xilinx.

US-based AMD is expected to close its US$35 billion acquisition of Xilinx by the end of the year. 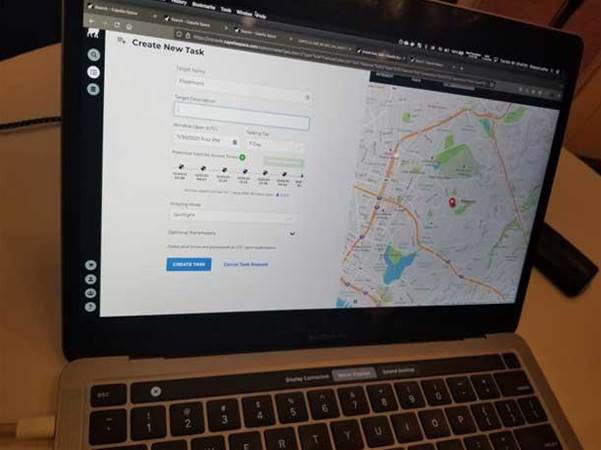 San Francisco-based Capella Space, founded in 2016, has raised US$82 million to date, according to Crunchbase. 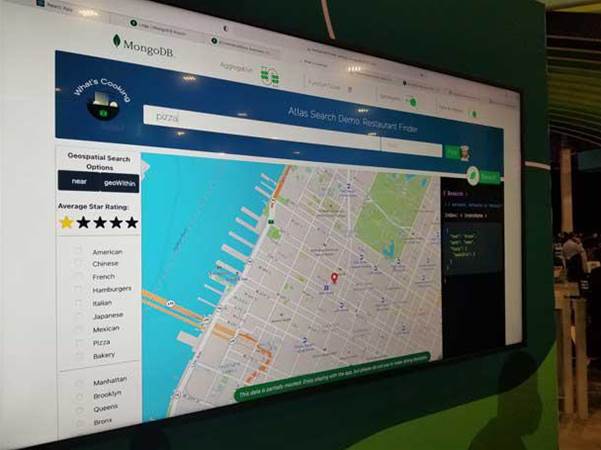 Cloud document database service MongoDB came to re:Invent to showcase its Atlas cloud-based database, which includes the Search feature used to create a search index for data in a single call to the application programming interface. 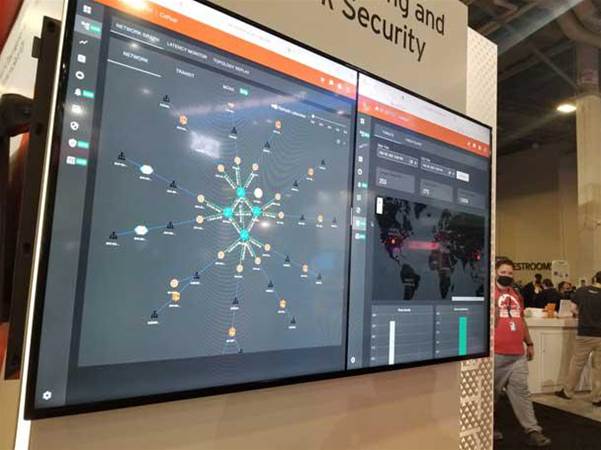 Representatives from cloud networking company Aviatrix talked to re:Invent attendees about its CoPilot central collector for network flows, health and topology data reported by each gateway of the Aviatrix Cloud Network Platform.

CoPilot aims to provide visibility into infrastructure across the data plane and control plane for the network topology, with topology mapping available. Users can look at specific gateways and track topology changes over time, according to the company.

Aviatrix in September raised US$200 million in Series E funding, which it’s using to scale worldwide sales and support operations, according to the company. 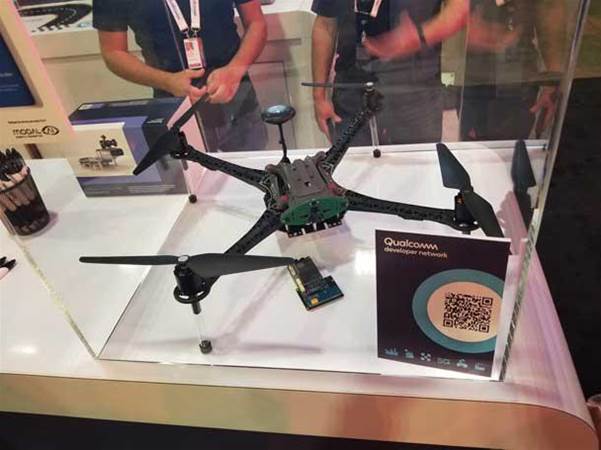 Unveiled this year, the platform aims to accelerate development for commercial enterprise and industrial drones. The 5G allows for flying capabilities beyond visual line of sight, according to Qualcomm. The platform has a secure processing unit (SPU) for cryptographic security.

The Qualcomm QRB5165 processor powers the platform, according to the company. Qualcomm teamed up with Verizon to bring the platform to the carrier’s 5G network.

Earlier this year, the San Diego-based company announced “collective support” from more than 30 carriers and telecommunications equipment makers around the higher-speed variant of 5G, known as mmWave (or millimeter-wave). The commitment appears to bode well for the industry to deliver on the promise of offering a significant speed increase with 5G. 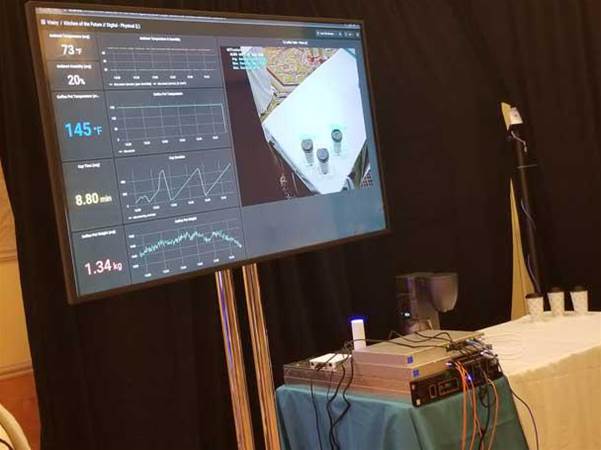 The platform is meant to track orders, check guests in when they arrive within a parking lot, decrease drive-thru line abandonment and predict the make time for orders.

Vestry uses AWS Outpost servers and the AWS Panorama Appliance used to analyse video streams from on-premises cameras using computer vision, according to Vistry. It also has partnerships with Intel and Nvidia. 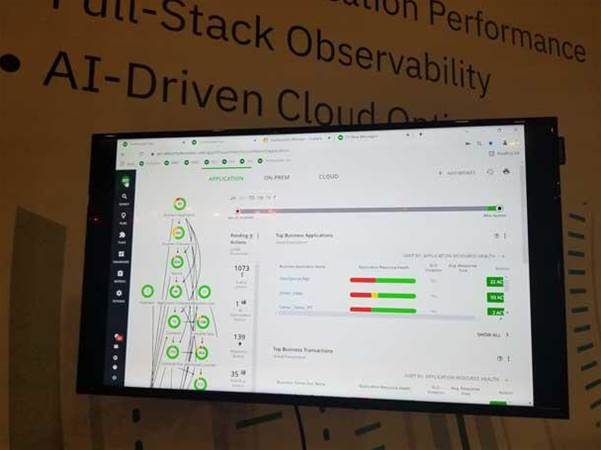 A team from recent IBM acquisition Turbonomic was at re:Invent to demonstrate the company’s application resource management platform.

Turbonomic’s artificial intelligence-powered platform aims to optimise performance, compliance and cost in real-time, continually resourcing applications to perform against business constraints, according to the company.

The platform supports cloud-native, cloud, hybrid and multi-cloud applications, with resource actions initiated manually, automatically, scheduled or part of an approval or development operations workflow, according to the company. The company considers infrastructures, platforms and containers as well as cost, CPU and memory.

During re:Invent, Turbonomic was unveiled as a launch partner for AWS’ migration and modernisation competency. Earlier this year, Turbonomic announced support for AWS GovCloud and Azure Government Cloud, according to the company.

IBM closed its acquisition of Boston-based Turbonomic for up to US$2 billion in the summer. 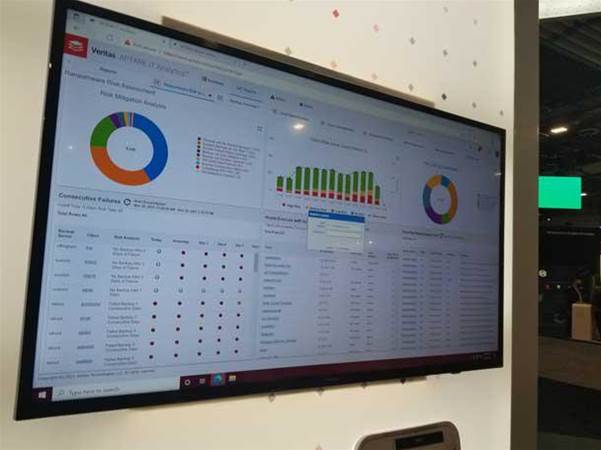 Aptare offers unified insight through a single pane in on-premises and multi-cloud environments so that users find underused IT resources and repurposes them. The tool can save companies in management software costs, consumed IT, consumed storage and consumed compute, according to the company.

Recent improvements to the product include NetBackup catalogue visibility to identify stale data and potential ransomware plus expanded support for IBM Cloud Object Storage and Broadcom SAN Switch, among other connectors.

With the recent acquisition of data collection technology Globanet, Veritas told CRN US earlier this year that it is positioning itself as the only company to offer a full stack of digital compliance capabilities to meet the exploding growth of data.

A dog-like robot that is used to inspect industrial environments, a platform to turn Java applications into microservices, and a drone that brings together artificial intelligence and 5G.

These offerings from Boston Dynamics, vFunction and Qualcomm, respectively, were among the devices and software demonstrations filling the conference floors of The Venetian Resort in Las Vegas last week for Amazon Web Services’ cloud computing-focused Re:Invent conference.

Held from Nov. 29 to Dec. 3, this year’s hybrid Re:Invent was in person and online, unlike last year’s event, which was held online only due to the pandemic. Attendees of 2021 re:Invent needed to be vaccinated against COVID-19 and masked.

Here’s a look at the products and services that stood out at this year’s re:Invent. 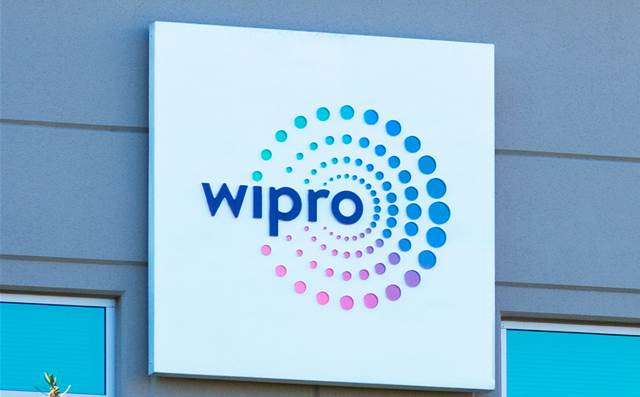 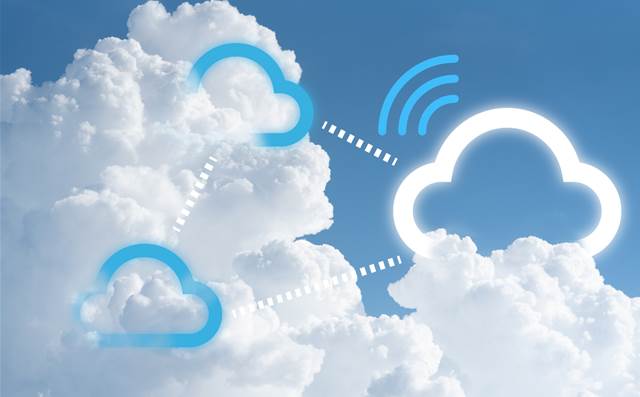 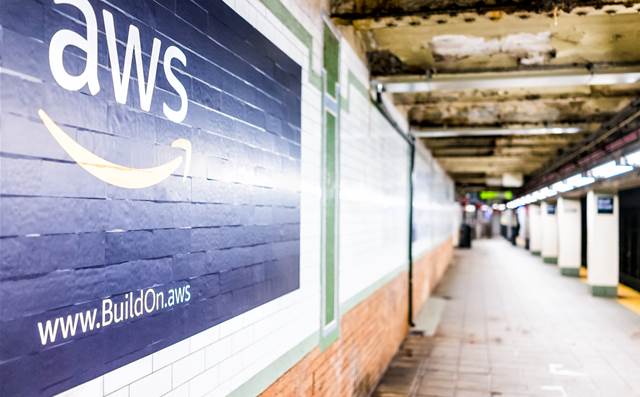