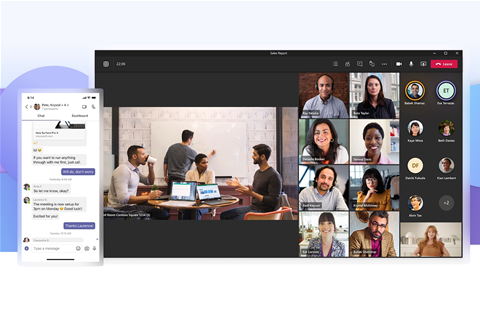 New product unveilings include Microsoft Loop, an application for information sharing across the Microsoft 365 suite, which includes Teams and Dynamics 365. Employee experience platform Microsoft Viva is now available to any users and features integrations with Teams. And Microsoft unveiled new functionality for Teams-focused hardware.

Improvements within the Teams app focus on security, mixed-reality capabilities and ways to host more compelling virtual events on the platform.

Microsoft Records Management has gained new capabilities integrated into Teams to improve data protection, according to the company.

New Communication Compliance integrations with Teams include the ability to analyse content shared within links to OneDrive and SharePoint sent over Teams. Communication Compliance can also detect offensive language and sensitive content shared with users outside the host team through a new integration with Teams shared channels, according to Microsoft. 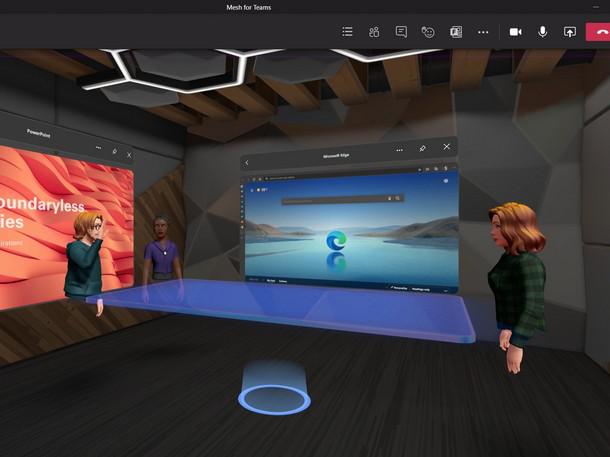 Microsoft plans to launch a preview of Mesh-enabled capabilities for Teams users on PC, mobile and mixed-reality headsets in the first half of 2022.

Users will have the ability to share and collaborate spatially on existing Microsoft 365 documents, presentations and content, according to the company. Users can make avatars for meetings and make them express emotions with live reactions. Organisations can create branded immersive spaces that look like conference rooms, design centres and networking lounges.

As an example of Mesh in action, Microsoft built Mesh-enabled immersive spaces with solution provider Accenture, which has used mixed reality to onboard new employees during the pandemic.

“The feature combines the mixed-reality capabilities of Microsoft Mesh, which allows people in different physical locations to join collaborative and shared holographic experiences with the productivity tools of Teams, where people can join virtual meetings, send chats, collaborate on shared documents and more,” John Roach, an executive architect in Microsoft’s digital transformation services, wrote in a blog post Tuesday.

“Mesh for Teams – which anyone will be able to access from standard smartphones and laptops to mixed-reality headsets – is designed to make online meetings more personal, engaging and fun,” Roach said. “It’s also a gateway to the metaverse – a persistent digital world that is inhabited by digital twins of people, places and things. Think of the metaverse as a new version – or a new vision – of the internet, one where people gather to communicate, collaborate and share with personal virtual presence on any device.”

Through the Microsoft Teams Connect tool – which allows for collaboration among multiple organisations – Microsoft plans to release an update for Chat with Teams that allows Teams users to chat with people outside the work network with a personal account. Users can invite people to chat on Teams with an email address or phone number and still follow an organisation‘s security and compliance policies. The update is expected by the end of the year.

Early next year, Microsoft will release a preview of shared channels for individuals across multiple organisations. This Teams Connect-enabled feature will allow users to schedule shared channel meetings for up to 50 teams and unlimited organizations, according to Microsoft.

“Microsoft is building the identity system of the future, one that connects and enables people, organisations, apps and even smart devices to make real-time access decisions safely and securely,” Shaw said.

“Microsoft Teams Connect runs on this trust fabric – every user and every access request is secured through our identity platform. And now, secure and trusted collaboration across boundaries can be established in a matter of minutes,” he said. Azure Communication Services interoperability with Microsoft Teams will become available in December. Developers will have new abilities to streamline voice, video and chat between users on custom-built applications, websites and Teams.

Teams users have now gained a new ability to view live transcripts as closed captions in the player or side pane as part of an update to Microsoft Stream, according to Microsoft.

Microsoft Teams and Dynamics 365 have gained new integrations with Editor with Context IQ, Microsoft’s natively integrated AI experience across the 365 suite. Users can pull customer content from Dynamics 365 into a Teams channel to use the data from within Teams.

Speaking of Dynamics, Microsoft has a new all-in-one digital contact centre solution powered by Teams and Dynamics 365 Customer Service, adding chat and voice connectivity among other business application capabilities, according to Microsoft.

In the first half of 2022, Microsoft will make available direct guest join for Teams Room users to join meetings in BlueJeans and GoToMeeting. Next year, the Yealink deskVision AIO24 24-inch display will be released as a standalone Teams device or second screen for PCs.

The AIO24 and Neat Frame will also gain the ability for hotdesking – a feature for finding and reserving flexible workspaces in a shared office environment through Teams, according to Microsoft. And Logitech has a new Teams panel, the Tap Scheduler.

The devices follow a trend of hardware designed to give users the most out of virtual meetings.

By the end of the year, Microsoft managed services will allow for Surface Hub management, according to the company.

Microsoft has introduced a new application that offers fluid components, flexible canvases and shared workspaces for asynchronous and synchronous collaboration available across the Microsoft 365 suite of apps, including Teams.

The app, Microsoft Loop, has lists, tables, notes, tasks and other components to keep workers collaborating on projects in sync. For example, users can add notes to calendar invites in Outlook and Teams to improve an agenda before a meeting and make a list of follow-up actions.

The canvases, also called Loop pages, allow coworkers to bring in files, links, data and other elements, and the shared workspaces aim to help coworkers track progress toward project goals, according to Microsoft.

The Microsoft Viva employee experience platform is now available for all users, featuring four modules: Connections, Insights, Topics and Learning. Teams integrations with Viva include users can add cards for approvals, shifts and tasks into the Viva Connections dashboard. All four modules of the Viva employee experience platform are now generally available.

The Viva Insights app for Teams will allow users to connect with colleagues, recognise accomplishments, track tasks and “explore personal habits that impact team culture,” according to Microsoft. The app will also give meeting organisers suggestions on improving habits.

Teams users will soon have the ability to add Viva Topics to chats and channels to share informational pages created and updated by artificial intelligence. Viva Learning is available to all Teams desktop and mobile users. Teams users can even add a curated set of learning resources to a channel as a tab.

More capabilities from Microsoft’s low-code development product Power Platform have been integrated with Teams. The Power BI app in Teams is available for all users with new scorecard visuals available for users that have opted into the Power BI Goals preview in Teams.

Teams users can browse Teams-specific automations in the Teams App Store and use Power Automate templates without advanced configuration, according to the company. Bot makers can also now share Power Virtual Agents in Teams in appropriate security groups. Soon, bot makers will have the ability to add their Virtual Agent to a channel.

A preview is available of Virtual Agents that can proactively message users, according to Microsoft. Microsoft has released a new integration with events platform Cvent for general availability and has plans for other improvements to Teams with the goal of improving virtual event hosting on the app.

Teams users can assign roles from the scheduling form and see the order of raised hands from users, according to Microsoft.

Later this month, Microsoft will launch a preview of Q&A in Teams for question-and-answer sessions during an event. The experience will include ways for organisers and presenters to mark answers, filter responses, moderate and dismiss questions and pin welcome messages and other posts. Also coming in November is an isolated audio feed feature for producers to create mixes from individual Teams users.

By the end of the year, Microsoft will release for all Teams users a webinar and meeting co-organiser feature for assigning up to 10 organisers, according to Microsoft.

Previews will launch early next year for virtual green rooms that allow organisers and presenters to talk, monitor chats, manage attendee settings and share content before an event begins and for enhanced controls that allow hosts to manage what attendees see.

All Teams administrators now have the ability to search for any function in the admin centre and use an application discovery tool, according to Microsoft.

Features now in preview to improve administrators’ experience with Teams include a device analytics dashboard for time-series data and device use metrics; a workspace view for meeting room devices, Teams displays and other devices in specific locations and priority account notification and alerts for devices and call quality.

Upgrades to Teams’ chat tool will roll out in early 2022, according to Microsoft. The upgrades include the ability for users to send themselves ideas, reminders and other messages; a chat density feature to customise the number of messages on screen with different modes and increasing the amount of 3D emojis from six to 800.

Teams chat users will also gain the ability to schedule messages and a new interface for search results that includes filtering and toggling between tabs.

Grow your software revenue by selling these 5 affordable, essential tools for the modern workplace
By Wade Tyler Millward
Nov 4 2021
12:44PM