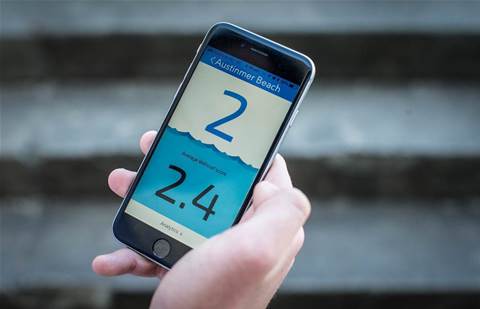 A 15-year-old high school student has taken centre stage at AWS Summit Sydney to launch an app he hopes will help to save 100 million sharks a year from culling.

Sam Aubin began developing the SharkMate app two years ago when he was just 13 years' old, after a friend was attacked by a shark while surfing at the NSW coastal town of Kiama. Aubin became interested in shark conservation after researching shark culling, and set out to build the app to protect not only surfers, but sharks as well.

Working with the University of Wollongong, Aubin developed the app which uses a range of data such as water and air temperature, time of day, migration patterns and historical shark sightings to calculate the likelihood of a shark sighting represented by a score out of 10.

The app collates data using AWS Lambda serverless infrastructure, and the analytics engine that sits behind the app shows 24-hour historical data for individual beaches and an average of all beaches in the area.

Aubin said he was able to learn a lot about application development on the internet. Aubin also teamed up with the university's SMART Infrastructure Facility to link aerial imaging from blimps that fly over beaches to generate AWS notifications to beach-goers, which can be received via a smartwatch while in the water and to mobile devices.

Speaking to AWS' chief architect Glenn Gore at the Sydney Summit this week, Aubin told the crowd that reducing the fear around sharks was the first step in saving them.

"Today, we're in a new era, and that's the era of information. It's so accessible now to go on the internet and ask a question and I think the internet has allowed everyone, no matter their experience, their background, to get into this industry and actually make a difference," he said.

Aubin took the opportunity to announce that the SharkMate app was available to download from the Apple Store.