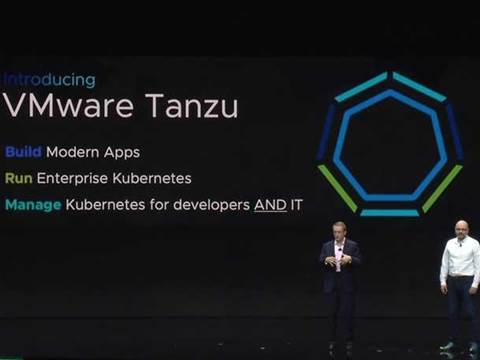 VMware Tanzu is rapidly gaining market momentum as enterprises and developers across the globe leverage Tanzu’s Kubernetes capabilities to build modern applications faster than ever before.

“Given the importance of application modernization and digital initiatives at all of our customers, you can imagine why Tanzu is becoming more and more central to what we talk about with a lot of our customers,” said VMware’s new CEO Raghu Raghuram during the company’s recent first quarter financial earnings report.

VMware Tanzu enables businesses to run Kubernetes in vSphere and manage Kubernetes across multiple clouds whether public or private, while allowing customers to automate the delivery of containerised workloads.

With roughly 80 million workloads today currently on vSphere platforms in the data centre, Tanzu is top of mind in VMware’s strategy to becoming a Software-as-a-Service (SaaS) and subscription software company.

CRN breaks down five figures and stats around VMware Tanzu Kubernetes in 2021 that channel partners, customers and investors should know.

Tanzu Included In 50% Of Largest Deals

VMware is driving the adoption of Tanzu at a break-neck pace for its largest customers. In fact, Tanzu was included in five of VMware’s top ten largest deals in its fiscal 2022 first quarter, which ran from Feb 1 to April 30.

“In terms of the momentum, [Tanzu] was present in five of our top ten deals,” said VMware’s Raghuram. “Given the importance of application modernization and digital initiatives at all of our customers, you can imagine why Tanzu’s becoming more and more central to what we talk about with a lot of our customers.”

Raghuram said momentum is being driven by Tanzu’s core Kubernetes capabilities, its innovation in the management of applications running on Kubernetes, and the tools VMware Tanzu provides for developers who use it to build applications.

VMware’s Raghuram disclosed that “at least” one-third of Tanzu deployments in 2020 were on public clouds.

“You have to help customers build modern applications faster on the cloud of their choice, and that is Tanzu. Tanzu today, 30 percent – at least one-third of the Tanzu business – are deployments on public clouds,” said Raghuram.

“They are moving to one or more clouds, as it turns out, and they‘re increasingly deploying applications in the data centre at the edge. It is this distributed enterprise architecture that’s taking shape. In order to help customers accelerate this, you have to solve multiple problems and that’s what our software platform does.”

Tanzu is enabling its customers’ developers to modernize their applications in the clouds of their choice via innovative software tools and the VMware Tanzu Developer Center. VMware’s centre provides tools for DevOps engineers, automation experts and developers.

Spring, for example, is one of the world’s most popular frameworks that enterprises leverage for writing high performing and testable Java code that can be used on top of Tanzu Kubernetes.

“Spring [is] very popular in enterprises. We have over five million developers that are registered developers of Spring. And Spring Boot [a developer training course], which is the technology Spring developers used to modernize apps, we are seeing 32 starts of Spring Boot applications every minute,” said Raghuram. “And that‘s an amazing number.”

“So we have quietly built quite a significant population of developers that are using Tanzu technologies to modernize their applications,” VMware’s CEO said.

VMware’s SaaS and subscription offerings include its modern application business of Tanzu and Pivotal, along with offerings like Carbon Black, Cloud Health Technologies, VeloCloud and VMware Cloud on AWS, as well as a portion of its end user computing business.

Grabbing the hybrid cloud opportunity with Lenovo and Azure Services
By Mark Haranas
Jun 9 2021
6:38AM