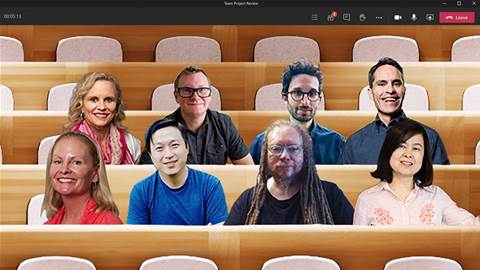 Microsoft on Wednesday signaled that it's continuing to invest heavily in development of its Teams collaboration app amid surging usage.

The Redmond, Wash.-based company announced that Teams--which has seen its user base explode during the shift to remote work this year--is getting an array of helpful new features now and in coming months.

Teams, which is included as part of Office 365 and Microsoft 365 subscriptions, will see updates to functionality for uses such as video meetings and personal productivity within the app.

What follows are five major new Microsoft Teams features and announcements to know about.

With its new updates to Teams, Microsoft is seeking to make video meetings more engaging and (potentially) less fatigue-generating.

A new feature coming to Teams, Together Mode, will place participants in a video meeting into a shared background. The idea is to make participants feel more like they're sitting together in the same room, Microsoft said.

The first shared background to launch will be an auditorium, while Teams will get additional background settings in the future such as a conference room, cafe or classroom, the company said.

Together Mode, which is made possible by AI segmentation technology, is an improvement because it lets users focus on the body language and faces of other users, according to Microsoft. That makes it easier to catch nonverbal cues, the company said.

While admittedly not appropriate for all meetings, Together Mode should be ideal for meetings "in which multiple people will speak, such as brainstorms or roundtable discussions, because it makes it easier for participants to understand who is talking," Microsoft said in a blog post.

Together Mode with the auditorium background will roll out to users starting now, with general availability in August.

Other new updates coming to Teams video meetings will aim to help participants better follow along in meetings, and get a recap of meetings afterwards.

Captioning is already available in Teams, but Microsoft says that it will soon start identifying who the speaker is with the captions.

Additionally, later this year, Teams will also add a transcription option for meetings, Microsoft said. Meetings transcripts will be saved in the meeting's chat tab for review later on.

A new app within Teams, the tasks app, is launching this month to offer users a unified view of their tasks across different apps. The tasks app can bring together tasks from Planner, Microsoft To Do and Outlook.

Additionally, the tasks app can create smart views--such as "assigned to me" and "important"--to curate a more-structured view of action items, according to Microsoft. The tasks app will be available in Teams across both PC and mobile devices. 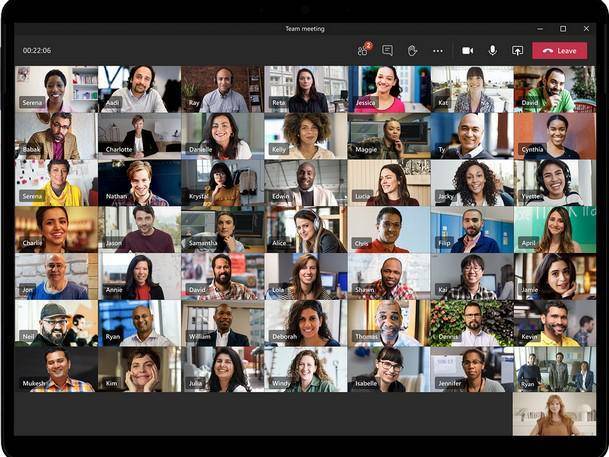 Microsoft previously disclosed plans to expand the Teams gallery view for video calls to 49 visible participants, from the current maximum of nine. The company is now sharing the timing for the Teams "large gallery view" rollout, with the 49-person view becoming available in August.

Moving to a 49-person gallery view will bring Teams to parity with the popular Zoom videoconferencing app.