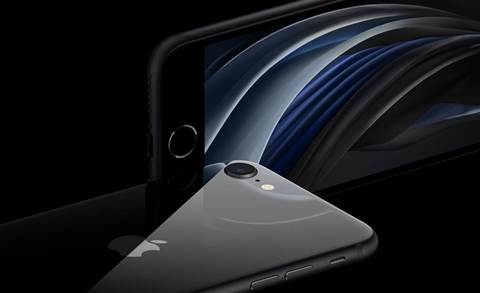 Apple is launching its first new iPhone of 2020 with an update to the iPhone SE, featuring an affordable price and modest display size.

The device is a successor to the original iPhone SE model, which launched in 2016. This time, however, the iPhone SE features a larger display size.

The second-generation iPhone SE takes the original idea for a compact-sized and low-priced iPhone and "improves on it in every way," including with an updated processor and camera system, said Phil Schiller, senior vice president of worldwide marketing at Apple, in a news release.

The launch also signals that Apple's manufacturing in China has begun to recover after the shutdown earlier this year due to the COVID-19 coronavirus outbreak.

What follows are five key things to know about Apple's new iPhone SE.

The second-generation iPhone SE features a 4.7-inch display, which is the same display size as on the iPhone 8. However, that makes the new iPhone SE noticeably larger than the original version, which had a 4-inch display.

The new iPhone SE includes Apple's Retina display technology and HD resolution (1,334 x 750 pixels, or 326 pixels per inch). That resolution is identical to resolution on the iPhone 8, as well.

One of the most notable updates to the new iPhone SE is the inclusion of Apple's A13 Bionic processor--since that is the same chip used in all of Apple's latest iPhones, including the higher-end iPhone 11 Pro and 11 Pro Max.

Apple is calling the the iPhone SE's rear camera the "best single-camera system ever in an iPhone" with 12 megapixels and an f/1.8 aperture on the wide-angle camera. Key camera features include portrait mode, depth control and six portrait lighting effects, Apple said.

Battery life on the second-generation iPhone SE is "about the same" as on the iPhone 8, with up to 13 hours of video playback available, Apple said. The iPhone SE also offers up to a 50-percent charge in a half hour (with a fast-charging adapter that's sold separately) and the device can be wirelessly charged, too.

Apple is keeping the starting pricing for the new iPhone SE at the same level as on the original version. The second-gen iPhone SE has a starting price of $399 for the model with 64 GB of storage.

Pre-orders for the new iPhone SE start on April 17 at 5 a.m. Pacific Time. The device will be available from Apple, Apple Authorized Resellers and carriers on April 24. For colors, the iPhone SE is available in black, white or red.

Eliminating departmental friction within MSPs
By Kyle Alspach
Apr 16 2020
6:53AM