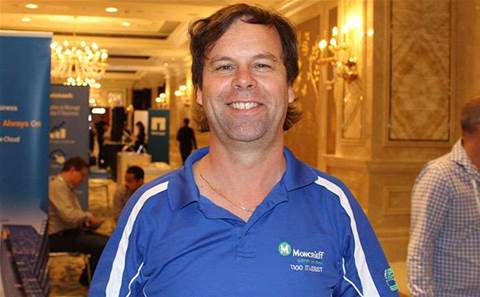 Perth-based reseller Moncrieff Technology Solutions proved that age is no barrier to innovation by launching a VersaStack-based private cloud on its 50th anniversary in business.

The third-generation company, which was founded in 1966 by the father and grandfather of current managing director Matthew Moncrieff, invested between "a quarter and half a million dollars" in the VersaStack infrastructure, which combines Cisco UCS and Nexus switching with IBM storage.

The platform is hosted in NextDC's Malaga data centre, with connectivity provided by Vocus.

Moncrieff explained why the company opted for the converged system approach. "You can go out there and create these solutions and bring together a whole lot of pieces of open source software that are quite cheap, but the problem with that is you almost become a pioneer.

"The other issue is, if you come across a problem, where do you go to get that support? So by going in with the backing of the Cisco Intercloud fabric, it enables us to have their development and their support behind the whole solution," Moncrieff said.

"We looked at different vendors and we could have got a much cheaper solution from another provider but effectively all they were providing was the infrastructure."

Moncrieff chose VersaStack over other Cisco reference architecture options thanks to the partner's long history with Big Blue. "We know the IBM storage technology well," he said.

Speaking to CRN at the Canalys conference in Macau this week, Moncrieff said the company had four customers running on the platform, which went live in July, and targets the secondary school market in particular, offering desktop-as-a-service based on Citrix.

"There are hundreds of schools in WA and they all have their own little silos of infrastructure. How powerful is it for them to consolidate all that," he said.

"A lot of time and effort is spent by schools on maintaining the end point. If we can move that out to a virtualised desktop, and all of the control and management is centralised, it takes a lot of the cost out."

CRN is a media partner of Canalys. The journalist travelled to Macau as a guest of the conference organiser.