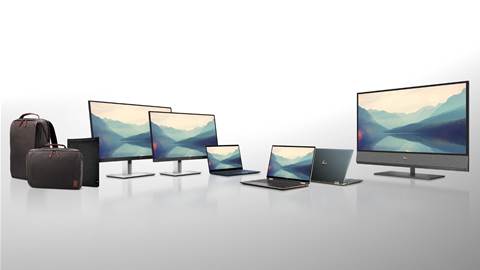 HP Inc. has been finding both tailwinds and headwinds in the COVID-19 crisis, with businesses such as 3-D print getting a boost and managed print services among the hard-hit segments.

On Wednesday, the PC and print giant disclosed results for its second quarter of fiscal 2020, ended April 30. The quarter saw net revenue sink 11.2 percent from the same period a year earlier, to US$12.47 billion, while GAAP diluted net earnings came in at 53 cents per share, above the company's previous guidance of 46 US cents to 50 US cents per share.

In two conference calls on Wednesday, including one in which CRN participated, HP executives including CEO Enrique Lores and CFO Steve Fieler shared details on the impacts from the coronavirus pandemic so far, as well as on the outlook for coming quarters.

While there's been plenty of anecdotal evidence that businesses have been rapidly shifting to notebook PCs from desktops for remote work purposes, HP's earnings report offers proof. Unit sales of notebooks climbed 5 percent from the year-ago period during HP's fiscal second quarter, while unit sales of desktops plunged 23 percent.

This shift is not expected to subside for HP any time soon, either. "As the work-from-home trend continues, we expect to continue to see [the notebook business] performing well, especially in the medium and long term," Lores said Wednesday during a call with reporters and analysts.

HP also reported a significant backlog of notebook orders that weren't able to be fulfilled in Q2 due to production constraints, caused by the manufacturing shutdowns in China and Southeast Asia from COVID-19.

"We are looking at addressing that during Q3, as now we have most of our manufacturing capacity back in place," Lores said. "This is our goal--to close the backlog during Q3."

3-D printing technology has been proving to be an essential tool in the fight against COVID-19, and HP--the maker of the Multi Jet Fusion industrial 3-D printer--has been highly active in the effort.

HP and partners using its systems have produced 2.3 million 3-D printed parts for medical applications so far, the company reported Wednesday. These include parts required for face shields, face masks, ventilators and respirators.

While HP's 3-D printer systems are obviously meeting a crucial need during the crisis, the systems are also getting greater exposure--which could mean wider deployment in the future.

"This pandemic has shown the benefits of 3-D printing--specifically, speed, agility and localized production," Lores said Wednesday during HP's quarterly call with analysts. "This has led to deeper, more strategic engagement with customers, as they evaluate their supply chain and consider a more distributed manufacturing model."

Contractual services--a top priority for HP in its print business--were a mixed bag for HP during its fiscal second quarter.

HP does not usually share specifics on the performance of its managed print services business, but made an exception on Wednesday. The company saw a roughly 40 percent monthly decline in MPS pages from February to April, Fieler disclosed.

HP was "impacted by the fact that companies shut down and people were not working and therefore not printing in the office," Lores said.

"This is actually going to help us to accelerate the strategy that we had in that category," he said.

From a contractual perspective, HP has started to hear from customers that it may have an advantage going forward because the company "plays so prevalently in both the home and office" in print, Fieler said.

As a result, "we can uniquely leverage our managed print services offering with our Instant Ink offering, to provide that sort of seamless transition from the home to the office with customers' employee base," Fieler said.

Already in decline for more than a year, HP's crucial supplies business took a bigger hit in the company's fiscal second quarter, even with the increase in Instant Ink subscriptions. Supplies revenue fell 15 percent during the quarter to US$2.84 billion, year-over-year.

And the current, third fiscal quarter is only expected to be worse for the supplies business, as many offices remain closed or have lower occupancy than in the past. In Q3, "we expect supplies revenue to be more pressured than Q2," Fieler said.

Joining tech companies including Dell Technologies, VMware and Hewlett Packard Enterprise, HP has implemented an executive salary reduction amid the economic crisis, HP executives said Wednesday. The move also includes a reduction in compensation for members of the HP board of directors.

HP did not disclose specifics on the amount or duration of the pay cut, but characterized it as a "temporary" salary reduction for senior executives at the company.

The ongoing declines in the print market have been exacerbated by the coronavirus crisis, even as at least a dozen vendors remain highly active in the market. As CRN recently reported, there are many indications that the printer industry is ripe for consolidation.

Lores has publicly stated several times in recent months that HP is eyeing M&A opportunities in print, and he did so again on Wednesday.

"We continue to believe that in the office space, consolidation is a value-creation activity," Lores said. And while the current priority is to stay focused on its business, "We're also monitoring other M&A opportunities--not only in the core businesses, but also on the growth side--that we think, because of the crisis, might be available to us."

Grabbing the hybrid cloud opportunity with Lenovo and Azure Services
By Kyle Alspach
May 29 2020
12:27PM