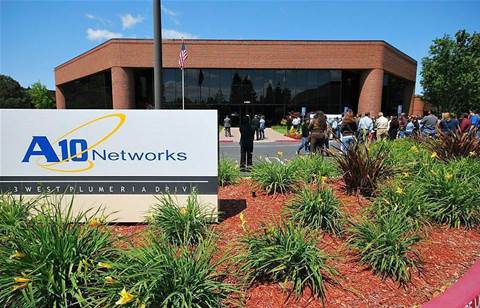 A10 Networks, a US technology company whose software and hardware help keep networks and data centres secure, is exploring options that include a potential sale of the company, people familiar with the matter said on Friday.

The move comes four years after A10 became publicly traded. The company’s shares have dropped more than 60 percent since then amid strong competition from large rivals, such as F5 Networks and Citrix Systems, as well as smaller peers, such as Radware.

A10’s sale deliberations are at an early stage, and there is no certainty that a deal will be reached, the sources said, asking not to be identified because the matter is confidential.

A10 did not respond to a request for comment.

A10 shares jumped 10 percent to US$6.41 on the news in morning trading on the New York Stock Exchange on Friday, giving the company a market capitalisation of close to US$500 million.

A10’s exploration of a sale comes amid a shift to cloud computing that has caused many businesses to rent computing capacity from Amazon Web Services or Alphabet’s cloud unit, rather than building out their own data centres. This is putting financial pressure on A10 and its peers, and is fuelling consolidation.

F5 Networks explored a sale two years ago after fielding takeover interest, Reuters reported at the time, though a deal never materialised.

In March, A10 Networks reached a settlement with Viex Capital Advisors, an activist investor that owned about 5.3 percent of the company at the time.

As part of this agreement, the company added a new board director and submitted a proposal to de-stagger its board to make it easier for shareholders to overhaul it.

In July, the company announced that, following an internal investigation by the board’s audit committee, it had to restate some financial statements, including quarterly revenue reports dating back to 2016.

Reporting by Liana B. Baker in New York; Additional reporting by Stephen Nellis in San Francisco; Editing by Jonathan Oatis

Eliminating departmental friction within MSPs
By Reuters Staff
Nov 26 2018
9:30AM