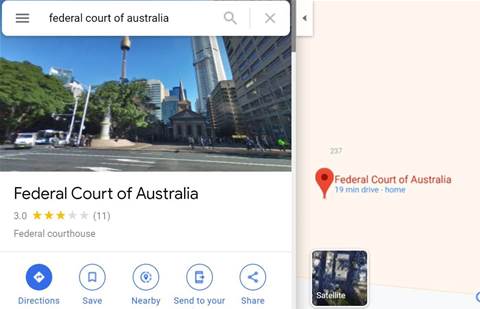 The Australian Competition and Consumer Commission has announced it will sue Google and its Australian subsidiary over how it has handled customer’s location data.

The consumer watchdog has begun proceedings in the Federal Court, claiming that the data-monetisation giant breached Australian Consumer Law by misrepresenting how Android users' location data was collected and used.

The case comes down to two settings in Android: Location History and Web & App Activity.

According to the watchdog, from at least January 2017, Google misled customers by not disclosing that both of these settings had to be switched off if customers didn’t want Google to collect and use their location data.

When customers set up a Google account or accessed it later, they would allegedly be under the impression that only Location History needed to be switched off for Google to stop collecting data.

ACCC chairman Rod Sims said that this resulted in Google collecting and using customer’s personal data without them making an informed choice.

“We allege that Google misled consumers by staying silent about the fact that another setting also had to be switched off,” said Sims.

“Many consumers make a conscious decision to turn off settings to stop the collection of their location data, but we allege that Google’s conduct may have prevented consumers from making that choice.”

The ACCC also claims that when customers accessed Web & App Activity, they were shown a message that purported that collected data would only be used by Google for its own consumer services. But that message failed to disclose that the data could be used for other purposes.

“We consider that because of Google’s failure to disclose this use of data, consumers were and still are deprived of the opportunity to make an informed choice about whether to share their personal location data with Google,” Sims added.

“Transparency and inadequate disclosure issues involving digital platforms and consumer data were a major focus of our Digital Platforms Inquiry, and remain one of the ACCC’s top priorities.”

The ACCC is seeking penalties, declarations and orders requiring Google to publish corrective notices, along with establishing a compliance program.

A Google Australia spokesperson told CRN: “We are currently reviewing the details of these allegations. We continue to engage with the ACCC and intend to defend this matter.”