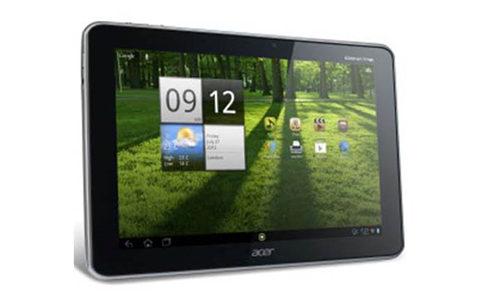 Acer has teamed up with Google to introduce the first Google Chrome-powered tablet on Monday which the two companies hope will put pressure on rival Apple's iPad.

Designed with collaboration in mind, the Acer Chromebook Tab 10 will target the K-12 education market and businesses relying on Chrome-powered tools and applications that have been looking for a tablet form factor.

The new tablet will be available in April, and similar to entry-level iPad pricing, the Chromebook Tab 10 will start at US$329. Out of the gate, Acer is only making the latest tablet available to commercial and education customers.

The Chromebook Tab 10 features a textured, cobalt blue-colored design to make for easy handling, especially in an educational environment. It weighs half a kilogram and sizes up at 9.98mm, slightly heavier and thicker than the iPad Pro. Similar to existing Android-powered tablets, thick bezels flank the 9.7 LED-backlit display with 2048 x 1536 resolution. The tablet also includes a Wacom EMR stylus that doesn't require a battery and can be inserted into its own slot on the tablet for storage.

The tablet boasts a 2-megapixel front-facing camera, and 5-megapixel rear camera, as well as a 3.5mm headphone jack and dual speakers. Inside, the product runs on the same OP1 platform that the 2-in-1 Samsung Chromebook Plus relies on today. The product also includes two Cortex-A72 and four Cortex-A53 processor cores under the hood, as well as 4GB of RAM and 32GB of storage with a microSD card slot for expansion. At full charge, battery power can last an estimated nine hours, according to Taiwan-based Acer.

In addition to Android applications, the tablet will fully support Google's existing education software and products such as Expeditions, Google Cast For Education, and its portfolio of collaboration tools, Gsuite.

The new Chrome OS tablet announcement comes one day ahead of Apple's own tablet-related news. The tech giant is expected to reveal a lower-cost iPad model on Tuesday, which reportedly will be priced at US$259.

"It will be interesting to see which other Chrome manufacturers come out with competitive tablets, and how quickly," Falcon said.

The tablet is expected to launch in EMEA in May.