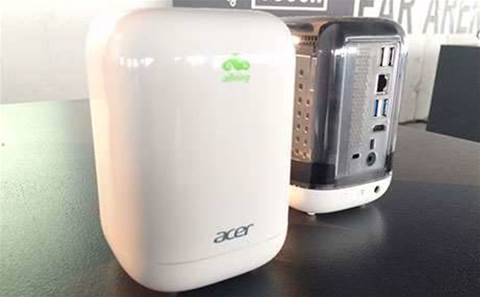 Acer has shed more light on its fledgling cloud strategy at an event in New York.

The vendor showed off the 'aBeing One' smart centre, a small hub that operates as a desktop private cloud.

The aBeing One is based on the same technology as Acer's Revo One small form factor PC.

According to the spec sheet, the aBeing One runs Windows 8.1, however CRN understands that Acer is providing a Linux version to developers to build applications for its cloud ecosystem.

The hub comes with 8GB RAM, an Intel i3 or i5 processor, and can be expanded to 6TB of storage. It connects via the internet to Acer PCs, tablets and smartphones and provides a private alternative to cloud storage.

It is part of what Acer calls 'Build Your Own Cloud' (BYOC), a way to create an ecosystem "for highly secure communication, consolidation, and sharing of information".

Also in Acer's BYOC range is a device for unified communications, the abPBX Plus, a commercial hybrid PBX and touchscreen deskphone for business users.

The cloud hub and unified communication platform represent the vendor's enterprise cloud strategy, what it has dubbed 'C&C' for computing and communication.

Steven Kiernan is a guest of Acer in New York.

Cloud application revenue made easy
By Steven Kiernan
Apr 24 2015
4:20AM