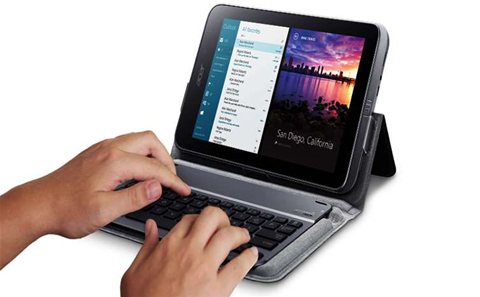 Acer has announced a fresh lineup of tablets running Windows 8.1 and Android.

The 8.1-inch Iconia W4 tablet runs Windows 8.1 and comes with a fourth-generation Intel Atom processor, "Bay Trail". Acer promised battery life of up to 10 hours and said the tablet would be available from the end of January at €299 (A$454) for the 32GB model. A 64GB version will also be offered, although pricing wasn't immediately available.

A 2-megapixel 1080P front camera and a 5-megapixel rear camera are also included, as well as a micro HDMI, microSD and USB ports.

It weighs in at 415g and has a width of 10.75mm, making it a lightweight machine. The Iconia W4 also comes with Microsoft Office Home and Student 2013 pre-installed at no extra cost.

"Consumers expect more than ever from value-oriented products, and the Acer Iconia A1-830 tablet delivers much more than tablets in this class with its vibrant IPS [in-plane switching] display, premium aluminium metal finish and great performance and sound," said Jerry Kao, associate vice president of the Acer Mobile Consumer Business Unit.

The 7-inch B1 tablets feature a 1.3GHz dual-core processor and 1GB of RAM. The B1-721 3G model will be available from the end of January, whilst the Wi-Fi only B1-720 will be on sale from the middle of this month.

Official Australian prices have not yet been revealed, nor have specific release dates.