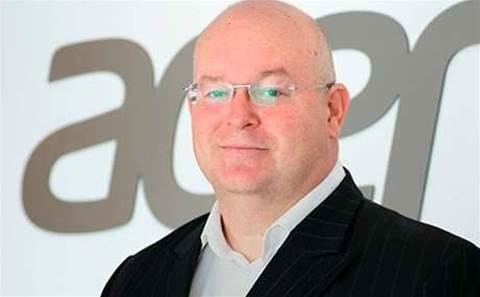 Acer Australia has produced a $45 million profit turnaround in the 2014 year, though revenue fell significantly.

While the PC maker posted a small after-tax loss for the 12 months to 31 December 2014, it was a far better result than the previous year, and local boss Darren Simmons claimed the company is "out the other side" after a difficult period of restructuring.

Acer Computer Australia's pre-tax profit was $1 million for its 2014 financial year, but this was dragged into the red due to a $1.9 million tax bill, leaving a $900,000 net loss after tax. The result was a marked improvement over the previous year, when Acer reported a $47 million loss in Australia, as profits were hit by a one-off $15.7 million settlement paid to the Australian Taxation Office.

Simmons told CRN he wasn't fazed by the fall in revenue, claiming Acer had "stopped the bad business we were doing. I just said no to low-margin business".

"It is good news, if you look at my P&L. The only reason I showed a loss was $1.9 million in tax. My view is I made a $1 million profit. The drop in revenue is significant, but to be honest there is some business I didn't buy into. I left that to HP and I left that to Lenovo," he said.

The PC vendor has been cutting costs by reducing opex and rebates and downsizing headcount since Simmons was appointed managing director in February 2014, replacing long-term boss Charles Chung.

"It was pretty hard. In December and January, I had a company that had downsized 50 percent of its staff and the ASIC report said we had lost $47 million in Australia."

He worried about how Acer's corporate customers would view the loss. "It was difficult times… but when the rubber hits the road, I had to look at opex and operating margins and review my business from end to end. I believe I have done that. I believe we are out the other side now."

This story of declining sales but improved profits can also be seen in Acer's global results. For the 2014 financial year, Acer Inc reported revenues of US$10.39 billion, down 8.5 percent but had gross profits of US$912.48 million, up 28.3 percent.

Globally, IDC figures show that Acer's share of global spend increased 24 percent while the market only increased 6.3 percent. However, Acer's market share in terms of shipments slipped downwards slightly from 24.5 million units sold in 2013 to 24.1 million in 2014, giving it a 7.8 percent share, which was good enough for No.4, behind Lenovo, HP and Dell, and ahead of Apple.

Simmons claimed that indicators from market research body GFK pointed to an improving picture for the Taiwanese PC manufacturer in the local market, with its Australian market share increasing in terms of units sold and also in revenue terms.

One healthy win in the 2014 financial year was Acer's deal to supply 13,000 desktops to Victoria Police. The PC maker recently won a contract to supply notebooks to Victorian teachers, worth up to $60 million over five years, which should boost its 2015 results.

Simmons said education remained a stronghold, but the 'bring your own device' trend was changing the dynamics. He said that for the first time ever, Acer saw higher consumer sales in January 2015 than in the December Christmas rush, which he cited as evidence of parents buying computers during the back to school period.

"I think mums and dads are going to the retail stores and buying product from the retailers. Nothing else explains that number explosion in that month to that degree."

Simmons conceded that Acer had lost traction in the SMB space, something he was trying to address through new channel programs. When CRN spoke to Simmons last week, he was preparing to take up to 20 SMB resellers out to Computex in Taiwan in conjunction with distributor Bluechip Infotech, part of a charm offensive to boost Acer's channel business.

Acer has signed up 100 partners to its new SMB portal and is currently driving leads toward the portal through mailshots and radio advertising.

The portal can be branded as if it were the reseller's own website, and customers can order computers, which are shipped and invoiced by Acer on behalf of the reseller. Simmons said it suited smaller resellers without an e-commerce presence.

"He [the reseller] will struggle with setting up a website and a transaction engine. He doesn't want to hold inventory. So he gets great advantage when I set up a web portal and mailing campaign, and I post [the device] out. [The reseller] gets 8 percent margin from me because he doesn't touch the box, the box is sent directly to his customer with an invoice and he gets a credit note," said Simmons.