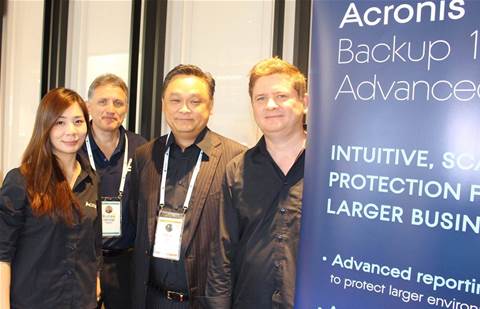 Julie Malcolm and Edith Kan join the company, with Malcolm taking on the role of ANZ channel sales manager and Kan taking the role of distribution channel manager.

Speaking to CRN at the 2017 Canalys Channels Forum in Perth, Steve Goh, Acronis APAC and emerging markets vice president, said the hires split the role held by Old from 2014 to April 2017 in two to give greater coverage and focused on “breadth and depth” channels.

“Julie will be focusing on a few important partners, she will be supported by her own sales engineer so we can always go deeper enabling our top partners, these will be the usual suspects like Datacom, Insight, Dimension Data and AC3,” he said.

“We also realised because we have a huge breadth of channels and we wanted to really enable them for the SMB space. So Edith will be working very closely with our two distributors, Synnex and Ingram, and will be driving programmatic activities to get all the breadth channels up and going.”

Kan will also work closely with Acronis' other two distributors, Rhipe and Exeed.

Malcolm has worked in channel roles for almost 20 years. She was most recently Trend Micro’s northern region partner manager for the vendors ANZ business, a role she held from late 2015 through to January 2017. Prior to that she has held channel sales roles at F-Secure Corporation, niche security vendor janusNET, Sophos and Clearswift.

Kan has worked in IT roles for more than eight years, most recently as the Asia-Pacific profitability manager for Insight. Prior to that she was a licensing sales specialist for Microsoft Australia and has also served as a data management analyst for Qantas.

Goh said Acronis was developing a new partner program designed to increase profitability for its reseller and distributor partners, focusing on extending margins to the “breadth and depth channels”. Acronis will also be ramping up partner marketing initiatives.

Michael Jenkin attended the conference as a guest of Canalys.

Cloud application revenue made easy
By Michael Jenkin
Dec 8 2017
7:00AM