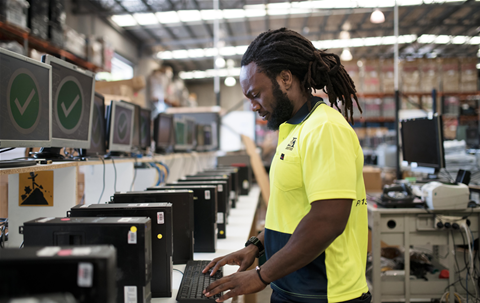 The $9.5 million contract with ACT Logistics lasts until 2026 and replaces a tender Greenbox first won with Defence in 2017.

“Prior to this, the Department of Defence had an agreement with Greenbox Pty Ltd for a similar ICT hardware disposal service,” a Defence spokesperson told CRN.

ACT Logistics managing director Alex Farenden told CRN it was “the largest Federal Government contract in Australia for ICT hardware disposal services” and that it covers 44 locations across Australia and 50 international locations in 39 countries.

The Defence spokesperson told CRN, “in support of the Federal Government’s Waste Minimisation ACT (2001), the Department of Defence aims to maximise the resale and minimise the recycling of its ICT hardware that is surplus to its requirements.”

“This includes ICT assets such as desktops, laptops, servers, switches and peripherals which are past their economic lifespan.”

ACT Logistics secured the contract through its position on the lucrative Hardware Marketplace procurement panel, which the Digital Transformation Agency created in 2018 to assist federal government agencies to purchase enterprise storage products.

“Defence periodically utilises a Whole of Government panel such as the Hardware Marketplace, which is maintained by the Digital Transformation Agency, to conduct an open tender for an ICT hardware disposal service,” said the defence spokesperson.

Farenden said the company won the open tender by having the capacity to meet the Department’s global requirements and high security expectations.

“It is no exaggeration to say that the Department of Defence requires an unparalleled level of security from its contract partners.”

“We have the capacity, infrastructure and accreditations to deliver on these expectations from day one both within Australia and globally.”

The Department’s previous contractor Greenbox launched its Canberra IT Commissioning Centre, specifically designed for government and defence sectors, in 2018, which was opened by then defence minister Christopher Pyne.