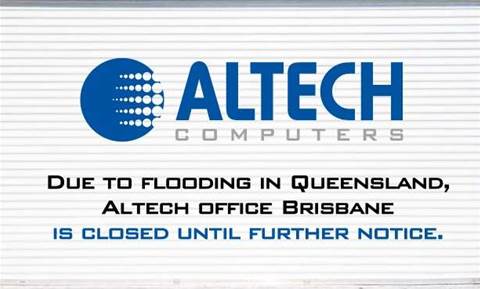 The Brisbane office of distributor Altech Computers has been hit hard by a surprise storm over the weekend, forcing it to close.

The Bureau of Meteorology reported hailstones ‘the size of cricket balls’, 9cm in diameter, over the weekend. Brisbane airport was shut down for a short period of time after the city was battered by storms for several days.

More than 100,000 homes and residences lost power on Saturday and over 18,000 were still without power on Sunday, reported Sky News.

Marketing manager Nick Popov said the company was still assessing the damage, but currently only the showroom was affected. The warehouse showed no sign of damage, and the branch should be up and running tomorrow, he said.

The branch’s 30 staff had been helping with the cleanup. Popov said most of the branch’s business was done online, meaning any potential revenue loss would only equate to around 25 percent of daily income.

Altech has six offices across Australia and New Zealand, with Melbourne, Sydney, Perth, Adelaide and Auckland accompanying the Brisbane office.