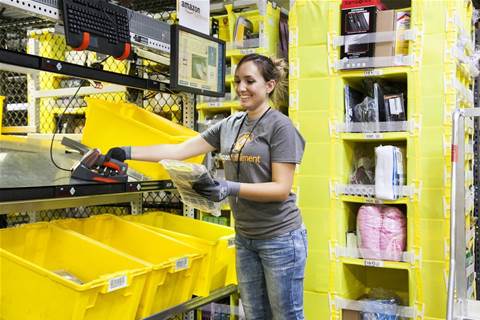 The paper says Amazon moves employees around in what could be an attempt to limit union organizing. For example, it creates heat maps and uses data such as team-member sentiment and a diversity index to figure out which of its stores may have a higher risk of unionizing, the report says.

This can have an impact on workers' ability to advocate for better working conditions and push for collective action, the paper said.

Companies across industries use data on their workforce to boost output. Companies have increased surveillance during the coronavirus pandemic to track employees and maintain a healthy workforce, and also to track time they spend working as more people telecommute.

Amazon has faced scrutiny for how it treats its workers.

A company spokesman said Amazon has expectations from its employees and measures performance against those expectations.

"Associate performance is measured and evaluated over a long period of time as we know that a variety of things could impact the ability to meet expectations in any given day or hour," the spokesman said in a statement. "We support people who are not performing to the levels expected with dedicated coaching to help them improve," he added.

Reuters reported in May that Amazon has long resisted unionization. Amazon spokeswoman Rachael Lighty said at the time that Amazon already offers what labor groups are requesting: US$15 per hour or more to start, health benefits and opportunities for career growth. She said employee health and safety were the company's top priority.

Sally Hubbard, director of enforcement strategy at the Open Markets Institute (OMI) and a former New York assistant attorney general, said: "Our aim is to show how the tremendous imbalance of power between employers and workers gets exacerbated by an alarming increase in surveillance."

The paper says invasive forms of worker surveillance should be prohibited and employers such as Amazon should obtain approval from state and federal agencies for non-invasive tracking measures that do not harm workers.

The research paper also says the National Labor Relations Board should prohibit certain types of surveillance and its use to limit unionization efforts.

If companies still do it, the burden must be on them to obtain approval from the Occupational Safety and Health Administration (OSHA), an agency under the Department of Labor, the paper said.

Cloud application revenue made easy
By Nandita Bose
Sep 2 2020
6:30AM