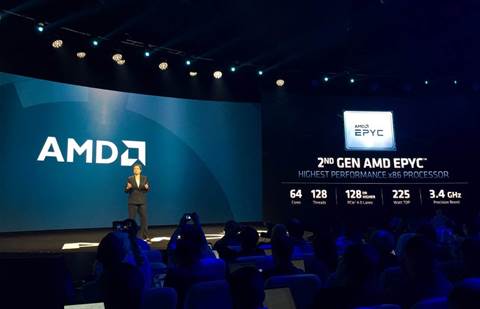 AMD has launched its second-generation EPYC "Rome" processors, revealing extensive details of the lineup's 19 SKUs that feature up to 64 cores and proclaiming that the new 7-nanometer products will become "the new standard for the modern data center."

"Today I can proudly say that second-gen EPYC is the highest, the highest performing x86 processor in the world," AMD CEO Lisa Su said at the company's EPYC launch event in San Francisco.

The company said its new EPYC processors double the performance and more than double performance per dollar while lowering operational expenses by 40-50 percent compared to AMD's first-generation EPYC and Intel's Xeon processors, driving a 25 to 50 percent lower total cost of ownership in the data center.

The advancements with the new EPYC processor line has allowed the chipmaker to achieve 80 world records for performance and beat Intel's top-line Xeon processor in benchmarks for enterprise applications, high-performance computing workloads and cloud services, according to Su.

For instance, the CEO pointed to a SPECjbb2015 benchmark for enterprise applications showing that AMD's new flagship EPYC 7742 processor has 84 percent higher performance from Intel's Xeon Platinum 8280L from the competitor's second-generation Xeon Scalable lineup that launched earlier this year.

"We are almost double [Intel's] performance," Su said. "That's what we call changing the game."

The new AMD processors raise the stakes against Intel, which has increasingly pitched itself as a data-centric platform provider with an expanding portfolio of products that include CPUs, memory, accelerators, connectivity solutions and software. On Tuesday, Intel announced that it plans to launch a new 56-core Xeon processor in the first half of 2020. 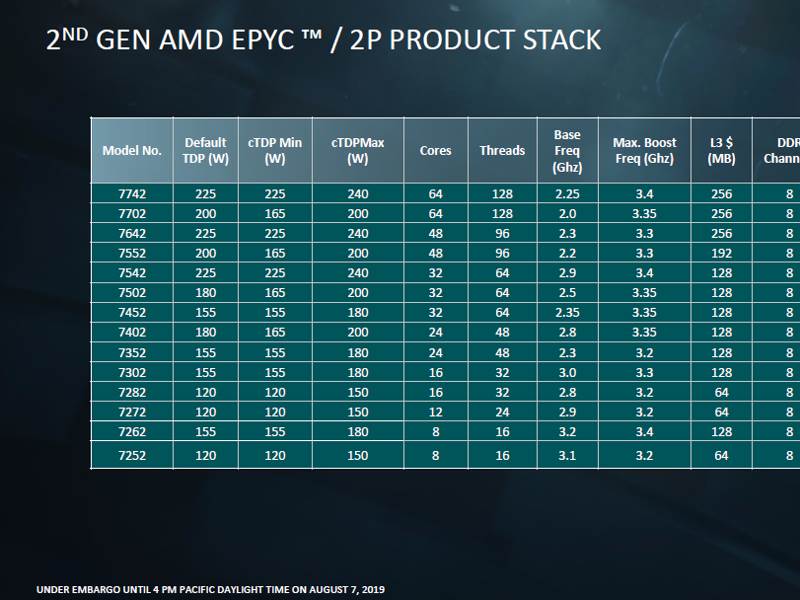 With up to 64 cores, second-generation EPYC features the highest core count in an x86 processor, which is double the company's first-generation EPYC, according to Su. The processors also increase the clock speeds and adds industry-first support for PCIe 4.0, thanks to AMD's Zen 2 architecture, which also serves for the basis of the chipmaker's Ryzen 3000 desktop processors that launched a month earlier.

The EPYC "Rome" lineup consists of 14 dual-socket CPUs that also work in single-socket configurations as well as five single-socket only CPUs. The processors range from 64 cores to 8 cores with base frequencies ranging from 2 gigahertz to 3.2 gigahertz. They all come with eight DDR memory channels, maximum DDR4 frequency of 3200 megahertz and 128 lanes or higher of PCIe 4.0 connectivity.

The second-generation processors are headlined by the EPYC 7742, which comes with 64 cores, 128 threads, a base frequency of 2.25 gigahertz, a max boost frequency of 3.4 gigahertz, an L3 cache of 256 megabytes. The CPU's default thermal design power is 225 watts, and it can go up to 250 watts.

The new EPYC processors come with new advanced security features, including hardware-based mitigations for the second and fourth variants of Spectre, which was among the side channel vulnerabilities that have largely impacted Intel processors in the past 18 months. AMD said the one variant of newly uncovered SWAPGS vulnerability is mitigated by a patch Microsoft has issued.

Other features include Security Memory Encryption and Secure Encrypted Virtualization, the latter of which allows for up to 509 encrypted guests on a virtual machine. The EPYC processors also come with a dedicated secure co-processor on the system-on-chip.

"Security is the foundation," Su said. "We must offer our customers, our users, the entire ecosystem a secure environment and that has to be designed in from the group up — and we have learned that."

AMD's first-generation EPYC processors, code-named "Naples," served as an important foundation in the chipmaker's journey to achieve performance leadership in the data center market again when they launched in 2017, according to AMD CTO Mark Papermaster.

"It was that first critical step in bringing competition back, because we did add significantly more cores" and changed dynamics across single-socket and dual-socket systems, Papermaster said. "It certainly provided a strong [total cost of ownership] statement and allowed us to take that first important step, showing we were back in high performance."

Papermaster said when AMD first started working on its EPYC road map, the company didn't know when it would reach leadership performance in the market. But that changed with second-generation EPYC.

"I couldn't be more thrilled than the data that you will see today, the benchmarks that you'll see rolled out today and where they land us in terms of our competitive position and put Rome, our second-generation EPYC, on the map as a leadership server offering in the industry," he said.

AMD's new journey in the data center is about delivering sustained performance improvement over the years, Papermaster said, which is why it's important that the company remains on track for its Zen architecture road map, with Zen 3 scheduled for a 2021 time frame while Zen 4 is in the design phase.