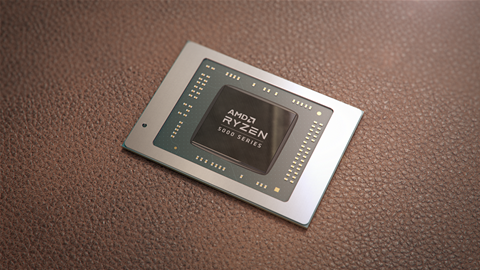 The new processors, based on AMD’s Zen 3 architecture, are expected to offer up to 67 percent faster responsiveness and up to 85 percent better graphics performance than its previous generation. Four new chips were released with between three and eight cores and up to 4.5GHz boost frequency, including the Ryzen 3 5125, Ryzen 3 5425, Ryzen 5 5625C, and Ryzen 7 5825C.

The company announced fiscal 2022 first quarter results on Tuesday with total revenue of $5.9 billion -- a 71 percent year over year increase (including revenue from its recent Xilinx acquisition) that shrugged off early signs of a softening consumer PC market. “Our focus remains on the premium, gaming, and commercial portions of the market,” AMD CEO Lisa Su said during the earnings call.

The new chips will be featured first in laptops from Google, HP and Acer.

“We are working closely with AMD to power a new generation of Chromebooks for the consumer and commercial markets,” John Solomon, vice president and general manager of Chrome OS at Google, said in a statement. “These Chromebooks, with AMD’s new Ryzen 5000 C-Series processors, are designed for greater efficiency, reliable performance and sustained battery life to enable increased collaborative productivity in Google Workspace and other business-critical applications on Chrome OS.”

Acer on Wednesday debuted the Chromebook Spin 514 featuring the new chips. “This new generation of Chromebooks is a great example of what a collaborative industry partnership can bring – excellence in compute performance, graphics, battery life and design,” said James Lin, Acer general manager of notebooks, IT business products, in a statement.

HP will use the new Ryzen chips in its HP Elite c645 G2 Chromebook Enterprise. “HP is committed to delivering innovative solutions for mission-critical workers and avid learners in today’s hybrid work environments,” Alex Thatcher, Director of Cloud Client Planning, Commercial Systems, at HP, said in a blog post. He said the new machine will “enable even more performance, efficiency and enhanced connectivity, delivering an exceptional experience no matter where and how you work and learn.”

Grow your software revenue by selling these 5 affordable, essential tools for the modern workplace
By Shane Snider
May 6 2022
12:11PM