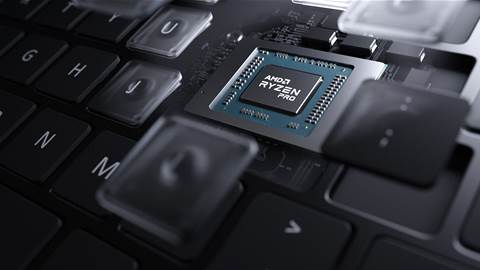 AMD is taking aim at Intel’s vPro lineup with the launch of its new Ryzen Pro 5000 processors for business laptops, which the chipmaker says is faster and more energy efficient for everyday applications while also offering the same level of enterprise-grade features.

The company said the new processors, announced Tuesday, are the only ones in the market that go up to eight cores for ultra-thin laptops. The new CPUs will push AMD’s number of commercial notebook design wins this year to 63, a 34 percent increase from AMD’s design wins in 2020 and more than double the 33 wins it had the year before. Among the OEMs supporting the Ryzen Pro 5000 launch are HP Inc. and Lenovo, which announced some designs back at CES 2021.

AMD continued its counter-attack on Intel’s 11th-generation Core mobile processors, code-named Tiger Lake, with new competitive comparisons between its new Ryzen Pro 5000 processors and the vPro variants of Tiger Lake, which Intel launched back in January.

“It’s delivering powerhouse productivity, specifically around applications that business users use day in and day out, and it’s doing all of this with an uncompromising portability, really a leadership battery life experience.”

Ryzen Pro 5000 consists of three 15-watt processors — the eight core Ryzen 7 Pro 5850U, the six-core Ryzen 5 Pro 5 5650U and four-core Ryzen 3 Pro 5450U — and they are based on the same 7-nanometer Zen 3 architecture as most of AMD’s standard Ryzen 5000 mobile processors that launched at CES 2021 in January. Compared to the Zen 2 architecture of the prior-generation Ryzen Pro 4000 processors, the Zen 3 architecture comes with a 19 percent increase in instructions per clock and a redesigned core layout that gives cores two times faster access to a larger cache.

When comparing the Ryzen 7 Pro 5850U to Intel’s Core i7-1185G7, AMD’s new flagship enterprise chip is 3 percent slower based on the Cinebench R20 single-thread benchmark, but Unangst said the processor excels by other measures. For the Cinebench R20 multi-thread and Passmark 10 CPU Mark benchmarks, Ryzen Pro 7 showed a 65 percent improvement. On the Geekbench v5 benchmark for multi-core applications, the Ryzen Pro 7 was 48 percent faster.

“Frankly, in the world we’re in today, we are increasingly seeing a focus and a need on multi-threaded performance, especially as business users are multitasking with video conferencing, multiple applications, browser windows open,” he said. “It really delivers a compelling use case.”

Unangst also broke out a measure that has become increasingly common among business users in the past year, showing that the Ryzen 7 Pro is up to 10 percent faster when using Microsoft Office applications on a 49-participant Zoom call.

“As we designed and optimized our Ryzen Pro 5000 processors, it was critically important to make sure that they were delivering a superior experience in that type of work environment,” he said.

“This is our mainstream product, and as we look across some of these measures of performance, we still deliver very competitive, if not leadership capabilities, even with our mainstream Ryzen 5 Pro,” he said.

One of the major advantages of the Ryzen Pro 5000 processors having a 15-watt thermal design power is they’re more efficient than Intel’s 28-watt Tiger Lake processors, according to Unangst.

“The combination of our Zen 3 core and that optimized 7nm manufacturing technology enables us to deliver leadership performance and the uncompromising battery life and power efficiency of that 15-watt infrastructure, where we don’t have to go push the performance or the thermal capabilities of the platform up,” he said.

Beyond claiming leadership performance and battery life, Unangst said the set of security, manageability and stability features that come with Ryzen Pro 5000 goes “toe-to-toe” with Intel vPro. Previous generations of Ryzen Pro have come with enterprise-level features, which are referred to collectively as AMD Pro Technologies, but the Ryzen 5000 chips come with new capabilities, mainly in security, on top of the existing AMD Memory Guard and AMD Secure Processor features.

The new security features include AMD Shadow Stack, a new silicon-based protection against a type of malware known as control-flow hijacking that is similar to the Intel Control-Flow Enforcement Technology found in its rival’s Tiger Lake chips. Ryzen Pro 5000 chips also support integration with Microsoft’s Secured-core PC feature in Windows 10 as well as FIPS 140-3 encryption certification for the Ryzen Pro’s AMD Secure Processor.

Unangst said while AMD will continue to focus on the commercial desktop space, the company sees most of the company’s growth to come from the notebook side. While Intel stole back some market share from AMD for laptops in the fourth quarter of last year, AMD ended 2020 with 2.9-point gain over Intel compared to the previous year, which brought its share to 19 percent.

“This growth that we have in the number of commercial notebook design wins, I think, bodes well for our opportunity as we look forward,” he said.