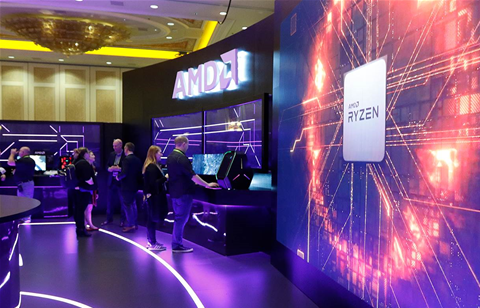 AMD is set to beat Intel to the market with its next-generation CPUs for client and server with this week's announcement that its third-generation Ryzen and second-generation EPYC CPUs will come out in mid-2019.

The company revealed its long-anticipated 7-nanometre Ryzen CPU and Radeon GPU, the former of which was shown to perform faster than Intel's highest-end client CPU, during CEO Lisa Su's keynote at CES 2019 on Wednesday. AMD also reiterated its intent to increase competition with Intel in the data centre market with its 7nm EPYC CPU, code-named Rome.

The third-generation Ryzen CPU will feature eight cores and 16 threads — same as Intel's top-end Core i9-9900K — and will support PCIe 4.0, which will be a first for a PC platform, Su said.

During her keynote, the company demonstrated the 7nm Ryzen's performance against Intel's Core i9, showing a higher score using the benchmarking tool Cinebench while requiring 30 percent less power.

"As a desktop processor, it will absolutely set the bar for performance, technology and power efficiency," Su said.

AMD also provided a demonstration of its 7nm EPYC server CPU, showing that it can run about 15 percent faster than two Intel Xeon 8180 processors. Su said the processor will provide a 2x increase in performance per socket and a 4x increase in floating point performance over the company's first-generation EPYC, which launched in 2017.

"I will go so far to say it is the best server processor the world has ever seen," Su said.

AMD's Radeon VII is the world's first 7nm GPU, providing 29 percent performance gains for gaming over the last-generation Radeon FX 590, Su said. The product will go on sale for US$699 on 7 February.

The high-end graphics card, which is based on AMD's Vega architecture, features 60 computing units running up to 1.8GHz, 16GB of high-bandwidth memory and 1TB/second in memory bandwidth, providing 25 percent more performance with the same power.

"If you think about all of the memory, and all of that compute you can imagine how good this GPU is for content creation," Su said.

AMD began its 2019 client offensive last week with a set of Ryzen 3000 Series processors for laptops, though those CPU are based on the company's current generation 12nm process technology.

During her keynote, Su said what really sets the Ryzen 3000 mobile processors apart is their integrated graphics technology, which provides comparable performance to dedicated graphics cards.

"We're proud to be able to deliver discrete level graphics performance," she said.

The company first shared details of its 7nm processors last November, where it revealed its 7nm EPYC server CPU.

In an interview with CRN USA last summer, AMD CTO Mark Papermaster said the company "went all in" with its 7nm process technology. Because of Intel's years of delays with its 10nm CPU, Papermaster said he believed that AMD will have an advantage in the market.