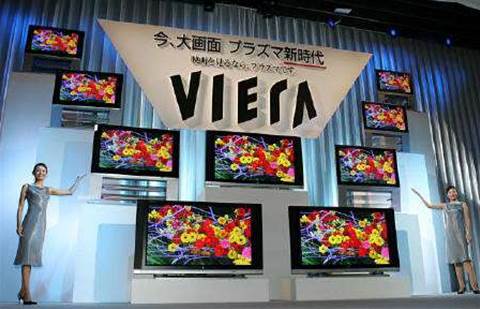 AMAGASAKI, Japan (Reuters) - Matsushita's new plasma display factory near Osaka, measuring roughly 15 football fields, is a reminder that size matters but is not the only key to success in the flat screen TV business.

Matsushita Electric Industrial, the world's top consumer electronics maker known for its Panasonic brand, said on Friday it would double output at its US$790 million plant in Amagasaki City by July, two months ahead of schedule, as it rushes to meet explosive demand for plasma TVs.

That investment is part of an industry-wide spending spree that has led to an oversupply of flat panels, pushing prices down sharply and pushing several players including Pioneer Corp and Sony Corp into the red.

South Korean plasma display makers Samsung SDI and LG Electronics — both slightly larger than Matsushita — are also pumping up capacity, but their plasma operations lost money in the second quarter and only managed to break even on an operating basis in the third.

Matsushita has been one of the few flat TV makers to post profits consistently because it possesses a rare combination of size, efficiency and the pricing power that comes with a strong brand, analysts said.

"Panasonic understands the market and is the first to cut the price to a level where it can secure a certain level of profit for itself but where other makers can't keep up," said Deutsche Securities analyst Yasuo Nakane.

Masaaki Fujita, director of Matsushita's plasma TV unit, told reporters on Friday he would aim to boost the operating profit margin of the plasma business to above 5 percent in the next business year starting in April, helped by higher sales and productivity gains at Amagasaki.

He did not disclose the current level, but analysts estimated the margin was around 3 percent.

Matsushita is betting its vertically integrated structure is its key advantage in flat TVs. Integrated makers produce their own crucial parts, allowing them to add value to their products and better control costs than competitors like Sony that have to procure panels and other components from other firms.

Matsushita not only makes its own panels but also the digital processor and driver chips that are key to determining picture quality. It also handles final TV assembly at facilities close to local markets in China, the United States, Europe and Japan.

"It's not just about lowering prices, its about having the ability to differentiate our products. This is our big advantage," Fujita told Reuters on the sidelines of a briefing at Amagasaki, the world's biggest plasma display plant.

In the global market for plasma TVs, Matsushita held 29 percent in the July-September quarter, up 2 percentage points from a year earlier, according to research firm DisplaySearch. LG had 14.9 percent and Samsung Electronics 13.7 percent.

Matsushita said it would aim to boost its share of the plasma TV market to 40 percent by 2006, by which time it expects the global market to have nearly doubled to 10 million units.

But grabbing market share without sacrificing margins could prove tricky, especially if TV prices continue to fall by a quarter each year.

"Matsushita is cutting costs and should benefit from higher output, but it all depends on how much prices fall," said Mizuho Securities senior analyst Koichi Hariya. "I wouldn't be looking for a signifcant margin jump next business year."

Hariya is worried about further price declines because he expects overcapacity in the plasma industry to be anywhere from 30 to 50 percent next year following output boosts by Matsushita, LG and Fujitsu Hitachi Display (FHP), a venture between Hitachi Ltd. and Fujitsu Ltd.

Pioneer recently shut down two production lines, but analysts are watching to see if it will join hands with FHP or even a South Korean maker to turn its plasma business around.

Another threat is the big push by Sharp, Sony and Samsung to sell more liquid crystal display TVs above 40 inches, encroaching on a segment of the market that until now has been dominated by plasma sets.

Matsushita also makes LCD TVs, but believes plasma is the best technology for TVs above 37 inches because they can be produced more cheaply at the larger sizes and offer better image quality on several measures including a wider viewing angle, smoother reproduction of moving images and a deeper black.

"Plasma is cheaper to produce at the big sizes," said Ken Morita, president of Matsushita's plasma display unit and called "Mr Plasma" by the domestic press. "Price is really a big issue and we will not lose on price."

Matsushita said the production yield at Amagasaki was above 90 percent. Capacity at the factory will be boosted to the equivalent of 3 million 42-inch panels in July, giving the company the ability to make over 5 million units annually including two factories in Osaka and one in Shanghai.