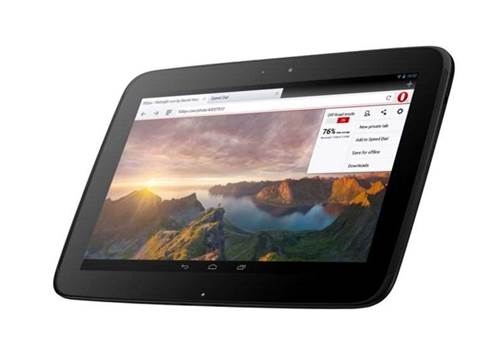 Opera 18 for Android shares many of the features seen in the Norweigan company's iPad browser, Coast, which was launched earlier this summer.

"The size of devices and mindset of users make the tablet very different from its smaller cousin, the smartphone, and we have to respect that. In Opera 18 for Android, we have spent hours and hours tweaking, and fiddling with the placement of, even the most minute detail, just to get that top tablet feel."

Despite the revamped interface, the tablet-oriented browser borrows features from the company's smartphone offerings, Opera Mobile and Opera Mini, including the Off-Road mode, which compresses web pages on Opera's servers before delivering them to the device, improving browsing speeds when bandwidth is limited, such as on shared public Wi-Fi hotspots.

Opera 18 for Android adds a Discover mode, which personalises content to the user based on their interest and location. Users simply swipe from right to left on the start screen to access this customised content.

Opera 18 for Android is available as a free download from the Google Play store.

Grow your software revenue by selling these 5 affordable, essential tools for the modern workplace
By Barry Collins
Nov 22 2013
9:18AM