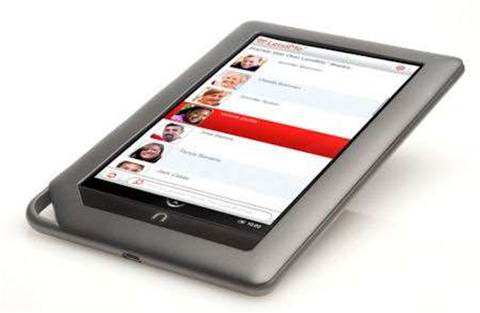 US bookstore and seller of the Android-based Nook e-reader Barnes & Noble has lobbied US regulators to probe the Microsoft royalty scheme that has hit the entire Android supply chain.

The complaint to the US Justice Department was filed on October 17, a week before Microsoft locked down royalty agreements that covered over 50 percent of the manufacturers that supply Android devices.

It's not known what patents Microsoft has used to strike agreements with the companies it has so far, however Barnes & Noble's complaint alleges that it was using "trivial and outmoded patents" and that Microsoft was "attempting to raise its rivals' costs in order to drive out competition and deter innovation in mobile devices", Bloomberg reported.

The Nook is manufactured by Taiwanese electronics giant, Foxconn, incidentally Apple's key iPad supplier, which is also one of the few manufacturers that has opted for litigation against Microsoft over royalty payments.

Two other major Taiwanese manufacturers Compal and Quanta Computer have agreed to whatever scheme Microsoft proposed. Samsung, HTC and Acer are amongst the nine device makers that have capitulated to Microsoft so far.

Barnes & Noble's complaint uses the same arguments Google's legal counsel did when they accused Microsoft and Apple of acquiring Novell patents as part of a wider strategy to stem sales in rival operating platforms and kill off innovation.

Microsoft said it would be pleased to extend a license to Barnes & Noble and, echoing previous statements, that the offer is available on "reasonable terms".