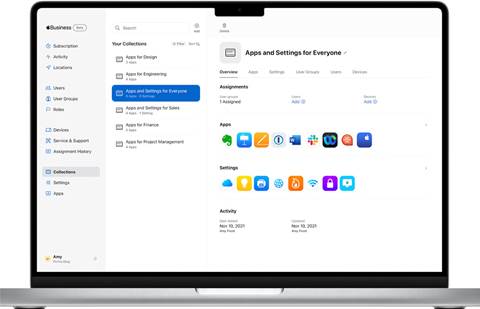 Apple on Wednesday announced a new subscription service aimed at helping small-business owners manage the Apple devices used by their employees, expected to rollout worldwide in 2022.

Business Essentials, as Apple is calling the service, is similar to management software that companies such as Microsoft or VMware sell to large business for setting up and keeping secure their fleets of phones, laptops and tablets.

However, Apple's version is simplified for businesses with between 50 and 500 employees with either a small IT department or none at all.

The service will cost between US$2.99 and US$12.99 per month per user depending on how many devices a business wants to manage for each employee and how much cloud storage the business wants.

For an additional monthly cost, Apple will also offer a service to repair or replace broken hardware at a business within four hours, though the company said it has not yet determined pricing for that service.

"Time is of the essence - for small businesses, it's one of their most valuable resources," Susan Prescott, Apple’s vice president of enterprise and education marketing, told Reuters in an interview. "As they start to grow, there are more demands on their time. And that can be in lieu of running the business doing the things they need to do."

Maribel Lopez, founder and principal analyst at Lopez Research, said the pairing of management software with a repair service subscription is unique in the industry.

"People are going to think that part doesn't matter, but I think they're underestimating the power of being able to get really good service," she said.

Apple said it will start testing Business Essentials in the United States on Wednesday, and it will be free until the service is finalised next year. Apple plans to expand it to other locations in the future, executives said.

Grab the MSP security opportunity
By Stephen Nellis
Nov 11 2021
6:56AM