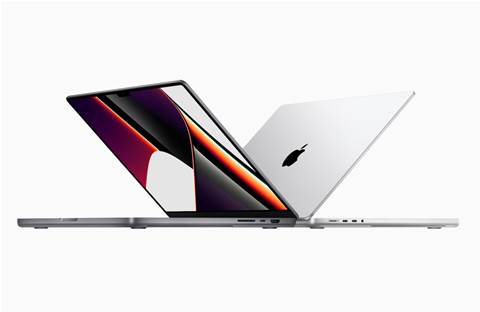 The new MacBook Pro models have gotten a form factor overhaul and will come in 14.2-inch and 16.2-inch display sizes. The notebooks will feature a wide range of other updates as well, including on the display, keyboard, port selection and collaboration features.

The redesigned new models are considered the higher-end MacBook Pros in the lineup, in contrast to the entry-level 13-inch MacBook Pro, which received an update a year ago with the addition of Apple’s original M1 processor.

In comparison to the Apple M1 with an eight-core CPU and eight-core GPU, the M1 Pro processor will feature a 10-core CPU for a 70-percent CPU improvement over the M1 and a 16-core GPU for 2X GPU improvement, according to Apple.

The M1 Max chip will also feature a 10-core CPU, but will move up to a 32-core GPU for a 4X GPU performance improvement over the M1, Apple said.

Both of the new MacBook Pro models will offer a choice between the two new Apple processors, the company said.

With the introduction of the new MacBook Pro models with M1 Pro and M1 Max, Apple is phasing out two more Intel-powered Macs in its lineup. Those are the higher-end 13-inch MacBook Pro (launched in May 2020) and the previous 16-inch MacBook Pro (which debuted in November 2019).

Apple is now halfway into its two-year transition away from using Intel processors in the Mac, Apple CEO Tim Cook said Monday during Apple’s event to announce the new MacBook Pro models and processors.

Along with the processor updates, the new MacBook Pro models have been redesigned to offer larger displays as well as slimmer bezels around the screen – 24 percent thinner on the left and right sides and 60 percent thinner on the top. The reduced bezels do mean that there’s now a camera notch at the top of the display, akin to the iPhone display design.

The new MacBook Pro displays have also gotten an increase in resolution, moving up to 3,455 x 2,234 for the 16-inch model and 3,024 x 1,964 for the 14-inch model, and now offer a 120Hz refresh rate for smoother display motion, which automatically adjusts using Apple’s ProMotion feature.

Additionally, the displays offer up to 1,600 nits of peak brightness and are the first in the MacBook lineup to offer Apple’s Liquid Retina XDR technology, previously included in the iPad Pro. Liquid Retina XDR is based on mini-LED display technology and aims to offer a more realistic image quality.

Other key updates with the new MacBook Pros include a starting point of 16 GB of RAM and options to configure the notebooks with 32 GB or 64 GB of RAM (the M1 MacBook Pro tops out at 16 GB of RAM).

Apple has also re-introduced a row of physical function keys on the new MacBook Pro models to replace the Touch Bar, a touch-sensitive strip that had been a controversial feature ever since its debut in 2016.

On collaboration, the new MacBook Pros will offer an improved six-speaker system, an enhanced 1080p front-facing webcam (with a wider aperture to let in more light) and a three-mic array with better noise reduction.

The 16.2-inch MacBook Pro will offer up to 21 hours of video playback on a charge – which Apple says is the longest battery life in a Mac notebook, and a 10-hour improvement over the predecessor model.

On battery life, the 14.2-inch model will offer up to 17 hours of video playback, an improvement of seven hours over the prior model, Apple said.

Pat Gelsinger, who became Intel’s CEO earlier this year, recently said in an interview with CRN US that he’s turning his focus to enabling ecosystems that compete with Apple.

“We ultimately see the real competition to enable the ecosystem to compete with Apple,” he said. “I was on the phone with [Microsoft CEO] Satya [Nadella recently]. I’m finishing my exit from the Apple closed garden. I’m now on the open ecosystem of Windows and Android, and we’re making that happen. But our experience has to be better.”

However, Gelsinger told Axios in an interview that he would like Intel to design chips for Apple again, though he expects that won’t happen for a while.

Dylan Martin contributed to this article.