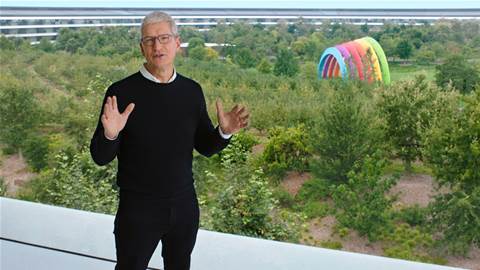 Apple’s fiscal Q2 was the first full quarter of sales for Mac models powered by the M1, the company’s high-performance Arm-based processor that debuted in November.

“Fueled by the M1, we set an all-time [Mac] revenue record continuing the momentum for the product category,” Cook said Wednesday during the company’s quarterly call with analysts.

The PC market overall saw unprecedented growth during the first three months of the year amid demand from widespread remote work and learning, research firm Gartner reported earlier this month.

Apple’s fiscal second-quarter results broke the Mac revenue record that had just been set during its fiscal Q4 of 2020, ended Sept. 26, when Mac sales reached US$9.03 billion. “The last three quarters for Mac have been its three best quarters ever,” Cook said.

Apple is about five months into its two-year transition away from using Intel processors in the Mac. Devices featuring the M1 so far include the entry-level 13-inch MacBook Pro, as well as the MacBook Air [pictured above] and Mac Mini.

Apple has enjoyed an “enthusiastic customer response” so far to the M1-powered Mac models, CFO Luca Maestri said during the quarterly call Wednesday.

Last week, Apple announced it’s extending use of the M1 further into its product portfolio, with the chip set to power the redesigned iMac and the refreshed iPad Pro. The new iMac and iPad Pro will be available to order on Friday with shipping in the second half of May.

Apple has touted advantages for its M1 processor including performance and battery life gains. For instance, Apple said the M1 will offer up to 85-percent faster CPU performance on the new iMac.

On Wednesday, the Cupertino, Calif.-based company reported double-digit growth across all of its product categories during its second fiscal quarter. That produced a 54-percent spike in Apple’s overall revenue for the quarter, year over year, with total quarterly revenue reaching US$89.58 billion.

The “strong popularity” of the 5G-enabled iPhone 12 family led to major growth once again for iPhone sales during the quarter, Cook said. Revenue from iPhones jumped 65 percent from the same period a year earlier to US$47.94 billion.

The iPad business saw the largest growth of any product category during Apple’s fiscal second quarter with a 79-percent increase in revenue to reach US$7.81 billion. Both Mac and iPad product sales have continued to benefit from demand spurred by work-from-home and remote learning, Maestri said.

Looking ahead, however, Maestri said that ongoing semiconductor shortages are expected to hamper the company’s iPad and Mac businesses.

“We believe supply constraints will have a revenue impact of US$3 [billion] to US$4 billion in the June quarter,” he said during the call with analysts—later adding that the supply impacts are expected to be “primarily on iPad and Mac.”

Cook later echoed the comments, saying that “those shortages primarily affect iPad and Mac - so we expect to be supply-gated, not demand-gated.”

Apple did not provide revenue guidance for future quarters.