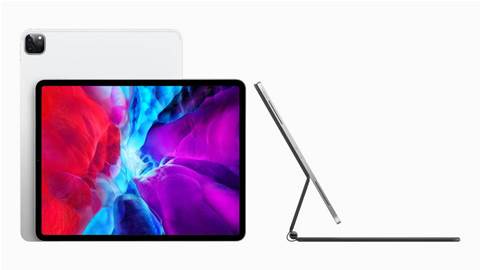 Apple is bringing its revamped keyboard design to more devices with the announcement of newly updated iPad Pro and MacBook Air models on Wednesday.

For the first time, the iPad Pro--Apple's answer to the Microsoft Surface Pro 2-in-1 tablet--will offer a keyboard with an included trackpad, Apple said.

The devices will also offer performance enhancements and other upgrades, such as improved cameras on the iPad Pro.

Now, Apple says the "Magic Keyboard" design--which uses a scissor mechanism and offers 1 mm of key travel for improved typing--will come both to the new MacBook Air and also to the detachable keyboard on the iPad Pro.

In particular, the lack of a trackpad on the iPad Pro keyboard had been a complaint among many users--and adding the trackpad could make the iPad Pro a stronger alternative to using a standard laptop.

On performance, the updated iPad Pro will feature the new A12Z Bionic chip, offering an eight-core CPU and eight-core GPU that makes the tablet "more powerful than most Windows PC laptops," Apple said in a news release.

The new MacBook Air, meanwhile, will move up to quad-core processors for the first time with 10th-generation Intel Core processors (up to Core i7 with a clock speed of up to 3.8GHz). That amounts to "two times faster performance when compared to the previous generation," Apple said.

Other major updates to the iPad Pro include the addition of a second camera--a 10-megapixel ultra-wide camera for taking expansive shots--that joins the 12-megapixel wide camera on the tablet.

Additionally, the new iPad Pro adds a LiDAR Scanner for improved augmented-reality experiences, allowing the tablet to rapidly measure the distance to objects that are up to 16 feet away.

The new MacBook Air is available to order today, and its starting price has been cut to $999 from $1,099 previously--even as the internal storage on the base model has been doubled to 256 GB.