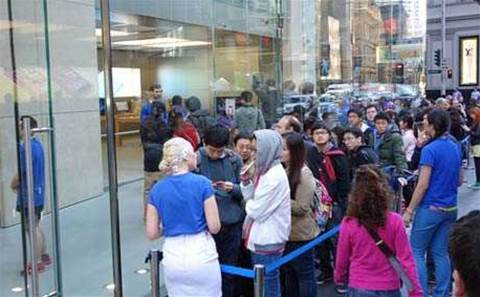 It seems people are still excited enough to queue for an iPhone.

Over the past week there has been a lot of conversation about whether or not queuing outside an Apple store was passé. There is a general feeling that , as the smartphone market shifts gear from new and exciting to regular upgrading, we will see less and less hoopla about launches.

After all, we all know that just around the corner, there will inevitably be a Telco store selling the same phone without the whooping Genius cluster and needless hyping.

Sure, those stores probably won’t be experiencing live crosses from morning television programs, but if people are just there to buy a new phone, then one wonders just why they are committing to a morning of standing in line waiting.

Of course, one can never discount the fact that the Apple store is the place to buy a phone outright at launch, and also the place most likely to have enough stock to meet demand. But one can’t help but feel that the ‘experience’ of standing in line, waiting to hand over cash is still a major driver on launch day.

One thing that has certainly changed in recent years is the timeframe of the lineup for a new iPhone. Whereas a few years ago you could expect a handful of brave souls sitting on George Street in Sydney for days, there was no one waiting there 24 hours before the store opened. Even the night before, when we passed by around 9pm, there was a tiny queue, counted in the dozens, not hundreds.

This morning, however, painted a very different picture indeed. At 9am the lines snaked from the door of the Sydney Apple store, around the corner and then hooked back onto York Street. Impressive to say the least, and proof positive that the lustre still hasn’t faded on the iPhone