Apple has a new entry-level iPad, too! 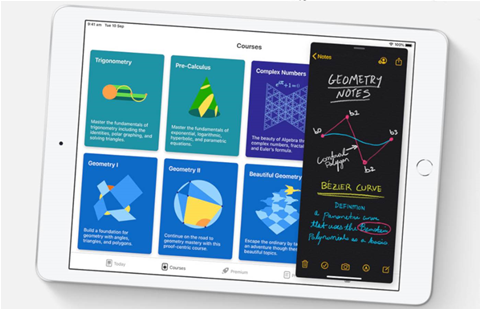 The days of the iPad as a slate-only tablet appear to be nearing an end.

Ahead of unveiling new iPhones Tuesday, Apple squeezed in a major iPad announcement with the launch of the seventh-generation model of the entry-level iPad.

And, for the first time, the entry-level iPad will now be able to connect directly to a keyboard. The iPad is also getting a boost in its display size and will have a slightly larger size overall.

What follows are five key things to know about the newest version of Apple's entry-level iPad.

It's not the "9.7-inch iPad" anymore: Apple said that the new iPad will feature an increased display size from the previous 9.7-inch display.

The seventh-gen iPad will include a 10.2-inch display, for a 5 percent larger screen than in the past.

The new iPad will feature Apple's vibrant Retina display technology, resolution of 264 pixels per inch (2160 x 1620) and 500 nits of brightness.

The other major update to the new iPad is the addition of support for Apple's Smart Keyboard for the first time—turning the seventh-gen iPad into the latest option on the market for a 2-in-1 tablet.

This is made possible by the first-ever inclusion of a Smart Connector port on the entry-level iPad, for connecting to a full-size Smart Keyboard (sold separately for $159).

The seventh-gen iPad also includes support for the first-generation Apple Pencil (sold separately for $99), as on the previous model.

The overall size of the entry-level iPad is going up a bit with the larger-screened, seventh-gen model.

The new iPad will have a height of 9.8 inches and a width of 6.8 inches, compared with 9.4 inches and 6.6 inches, respectively, on the sixth-generation model.

The new iPad will also have a slightly higher starting weight, of 485 grams, compared with 467 grams previously. The tablet's thickness is staying the same at 7.3 mm.

A few things won't be changing on the new iPad, including the processor—which will continue to be the A10 Fusion, the same chip as on the sixth-gen iPad.

Apple is also promising identical battery life in the seventh generation to the previous model, with up to 10 hours on a charge available.

Internal storage options are unchanged as well, with the new iPad offering 32 GB and 128 GB configurations.

Even with the larger display and keyboard connectivity option, Apple said the seventh-gen iPad will stick with the same pricing as the previous generation--with a starting price of $529 for the Wi-Fi-only model and $729 for WiFi + Cellular.

The new iPad is available for pre-ordering Tuesday, and will be shipping 30 September. The tablet will ship with the new iPadOS operating system, Apple said.