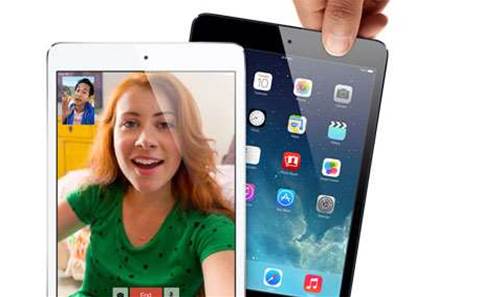 Apple will be unable to widely roll out a new version of the iPad Mini with a high-resolution "retina" display this month, people who work in the company's supply chain said, leaving the gadget without the sharper screen found on rival tablets from Google and Amazon.com.

Apple's supply chain is only now gearing up to make retina displays for the iPad Mini, which means the gadgets could be available in only limited quantities this year, if at all, and the company may miss the chance to cash in on the year-end holiday shopping season, the sources said.

Apple has come under pressure to preserve market share and bolster sales against rivals that are rapidly raising specifications and lowering prices.

It remains unclear exactly what new features and modifications could find their way into the next iPad Mini, which the sources said was due to be unveiled this month.

But higher-resolution screens and cameras, as well as thinner and lighter dimensions, are among the improvements users have come to expect with updated smartphones and tablets.

"If they don't put in retina ... there will be howls," said Frank Gillett, an analyst with Forrester.

Apple declined to comment about any product launches and the sources at companies in Apple's supply chain declined to be identified due to the confidentiality of the matter.

The feature is available on some full-sized iPads, and similar resolutions are available on iPad Mini competitors such as Google's Nexus 7, as well as Amazon's seven-inch Kindle Fire HDX due to go on sale this month.

The reason behind the delays in manufacturing the retina display screens for the iPad Mini were unclear. One source at a supplier said there were delays in Apple's certification of panel producers, which were given strict power-saving requirements.

Given the time required to ramp up screen production, a retina display-equipped iPad Mini would not be available in large volumes until early next year, the sources said.

The sources expected Apple to either wait until early next year for a full-fledged launch of a retina display iPad Mini, or to make a retina version only available in limited quantities before the end of the year.

Apple has also told suppliers to reduce costs, two of the sources said, with one person saying the US firm is looking at rolling out an iPad Mini with a smaller 8 gigabytes of memory.