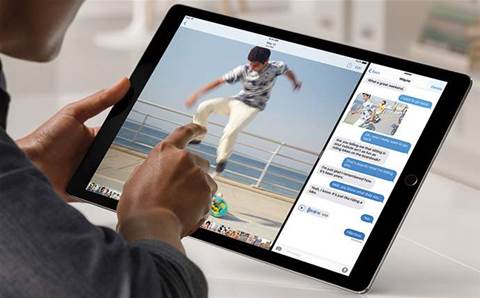 Apple’s iPad Pro, a detachable 2-in-1 released in November, outsold Microsoft's competing Surface Pro tablets in the holiday quarter, according to a report by market research firm IDC.

The results come as detachable tablets gain traction over declining slate tablet shipments, even as the tablet market overall in the fourth quarter dipped 13.7 percent from the same quarter the year before, according to IDC.

"This quarter was unique as we had new detachables in the market from all three of the major platform players," said Jitesh Ubrani, senior research analyst with IDC.

"Despite lukewarm reviews, the iPad Pro was the clear winner this season as it was the top selling detachable, surpassing notable entries from Microsoft and other PC vendors. It's also important to note that the transition towards detachable tablets has presented positive opportunities for both Apple and Microsoft."

According to IDC, Apple sold about 2 million iPad Pros in the fourth quarter. This was more than the 1.6 million tablets sold of Microsoft's competing Surface Pro detachable tablet lineup.

The iPad Pro helped Apple lead the global tablet market, with 24.5 percent share. Despite its reign over the other vendors, Apple’s tablet shipments continued to slide, falling to 16.1 million shipments, 24.8 percent down from the same quarter last year.

While Microsoft's tablet sales did not help it make the top five market vendors in the overall market, the Surface Pro devices have gained popularity among enterprise customers.

However, according to IDC's report, performance seems to be a more important feature for customers who acquire detachable tablets: The iPad Pro has an A9X processor, while the Surface Pro 4 contains a sixth-generation Core i5 chip.

Despite the iPad Pro's edging out Surface Pro sales in the holiday quarter, Microsoft authorised devices resellers who resell Surface Pro tablets said they are seeing high sales volume of the device in the enterprise.

"The Surface Pro tablets are finally getting entrenched in the enterprise market. ... They add a different perspective to clients looking for a PC," said one Microsoft partner who wished to remain anonymous. "We're excited moving forward. ... We're seeing a lot of refreshes with HP and Microsoft tablets as enterprise clients weigh their options with older PCs."

Detachable tablets continued to gain traction in 2015 overall. While pure slate tablets experienced their greatest annual decline of 21.1 percent over the year, detachable tablets more than doubled their shipments since the fourth quarter of last year.