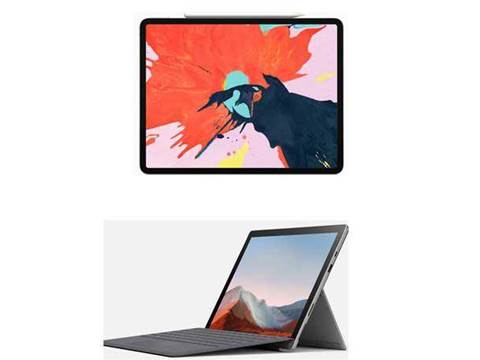 Despite the dominance of the laptop for work, the 2-in-1 tablet continues to have a loyal user base. And top tablet makers Apple and Microsoft have responded with plenty of updates for their productivity-focused tablet offerings.

Meanwhile, for the 2-in-1 iPad Pro, the latest release offers several enhancements including a revamped keyboard design and improved performance.

Which of these 2-in-1 tablets is a better fit for your needs? What follows is the CRN USA Test Center comparison of the latest Apple iPad Pro vs Microsoft’s Surface Pro 7+ on price, specs and features. 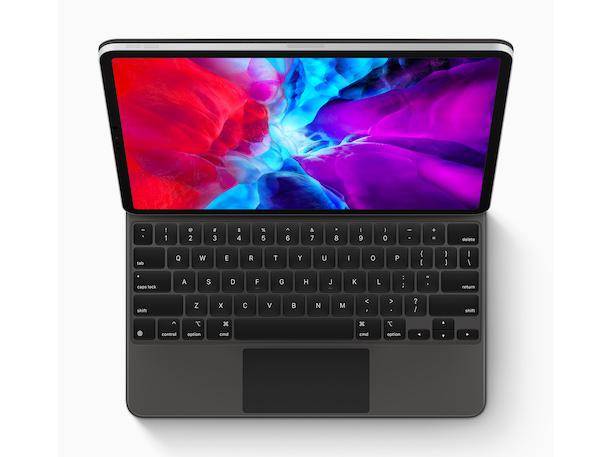 There are two models of Apple’s iPad Pro—one with an 11-inch display and one with a 12.9-inch display. By comparison, the Surface Pro 7+ falls in between those two models on display size with its 12.3-inch screen. Apple has also updated the keyboard options for the iPad Pro with the latest release. Most notably, Apple has introduced a new Magic Keyboard option for the iPad Pro. The Magic Keyboard uses a scissor mechanism and offers 1 mm of key travel for an improved typing experience. Additionally, the keyboard includes a trackpad for the first time on an iPad keyboard. The latest iPad Pro is also compatible with the previous keyboard design, the Smart Keyboard Folio, which does not offer a trackpad.

Likewise, Microsoft offers two keyboard options for the Surface Pro 7+—though both come with a trackpad. Those options include a basic Type Cover and the “Signature Edition” with Alcantara fabric around the keys. The Surface Pro keyboards also offer deeper keys than the iPad Pro Magic Keyboard, with key travel of 1.3 mm. In each case, the tablets in our comparison are a workhorse on performance. For the latest iPad Pro, the performance gets a major boost with the inclusion of Apple’s A12Z Bionic processor. The chip includes an eight-core CPU and eight-core GPU that makes the tablet “more powerful than most Windows PC laptops,” Apple said.

Meanwhile, the Surface Pro 7+ moves up to 11th-gen Intel Core processors, from the 10th-gen Intel chips of the Surface Pro 7, for a performance boost of more than 2X, according to Microsoft. Configuration options include a dual-core chip (the Core i3) and two quad-core options (Core i5 or i7) from Intel’s 11th generation—up to the Core i7-1165G7. The latest iPad Pro and the Surface Pro 7+ both offer the same four storage configuration options. Internal storage starts at 128 GB for both tablets, and the devices are also configurable with 256 GB, 512 GB or 1 TB of storage. Other major updates to the iPad Pro include the addition of a second camera--a 10-megapixel ultra-wide camera for taking expansive shots--that joins the 12-megapixel wide camera on the tablet. Additionally, the latest iPad Pro adds a LiDAR Scanner for improved augmented-reality experiences, allowing the tablet to rapidly measure the distance to objects that are up to 16 feet away.

Main differences for the Surface Pro 7+ from 2019’s Surface Pro 7 include optional LTE Advanced connectivity and a removable SSD to help enhance security and data retention.

Keep in mind that these prices do not include a keyboard or stylus. Prices vary depending on the keyboard model, but for the top-of-the-line keyboards—the Magic Keyboard for the iPad Pro and the Signature Type Cover for the Surface Pro 7+--the pricing is $589 and $249, respectively.