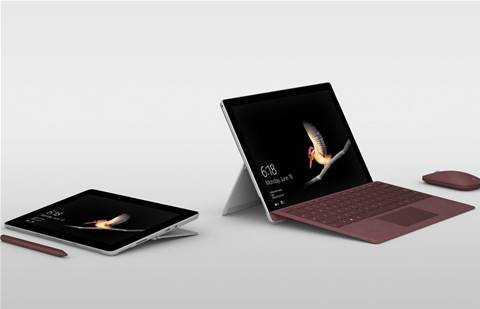 The tablet battle between Apple and Microsoft is heating up in 2018. The iPad and Surface are two of the biggest tablet brands out there, and both lineups now have new entry-level, low-priced releases available. Those would be Apple's latest iPad (6th gen) and Microsoft's new Surface Go.

While consumers are certainly a target of the new devices, both Apple and Microsoft say the tablets are primed for education and productivity users, too. Which of the tablets is a better fit for you or your organisation?

The two tablets in our comparison are similar on display size, with Apple's iPad measuring 9.7 inches and Microsoft's Surface Go just a bit larger at 10 inches. In terms of display technology, the Surface Go uses Microsoft's PixelSense technology, while the iPad uses Apple's Retina display; both technologies rate high on offering a bright and colorful picture. The iPad boasts a higher-resolution screen though, at 2048 x 1536 pixels and 264 ppi. That's compared to the 1800 x 1200 screen of the Surface Go, which offers 217 ppi.

At the outset, the Surface Go is only available in a wi-fi version - though an LTE-enabled model of the tablet will be available "later this year," Microsoft said. By comparison, the iPad comes in two models - a wi-fi-only model and a wi-fi/LTE model.

For port connectivity, the iPad features a Lightning connector for charging and data transfer, along with a Nano-SIM tray that supports Apple SIM. The Surface Go is more versatile with the inclusion of a USB-C port, along with Surface Connect and a MicroSDXC card reader.

Apple doesn't emphasise keyboard usage with the iPad (which doesn't feature a "Smart Connector" port for hooking in a keyboard, like the iPad Pro). The iPad does support certain Bluetooth keyboards, though none are made by Apple.

By contrast, Microsoft is promoting the Surface Go as a 2-in-1 capable tablet that is made to work with Microsoft's own Type Cover keyboard, which is sold separately. The Surface Go keyboard comes with keys that are the same size as the keys on the Surface Pro Type Cover - and have some design tweaks that should also improve the feel of the keys, according to Microsoft.

The sixth-generation iPad uses Apple's quad-core A10 chip, which has a clock speed of up to 2.34 GHz. The Surface Go is powered by the Intel Pentium Gold 4415Y chip, which is dual-core and clocks at a speed below that of the A10 - up to 1.6 GHz. However, the Surface Go easily tops the iPad when it comes to RAM, with the Surface Go offering variations with 4 GB or 8 GB of RAM. That's compared to the 2 GB of RAM included in the iPad.

With a starting price of $469, the Apple iPad (with wi-fi connectivity only) is the winner on affordability. The Surface Go starts at $599, by comparison. Keep in mind, though, that this pricing for the Surface Go will get you double the storage and double the RAM of the iPad -- as well as the ability to connect to a Microsoft Type Cover keyboard.

Pre-orders have begun for the Microsoft Surface Go, and the device will begin shipping as of 2 August.

Grow your software revenue by selling these 5 affordable, essential tools for the modern workplace
By Kyle Alspach
Jul 16 2018
10:28AM