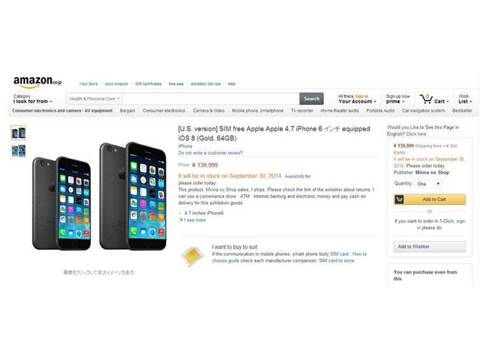 Details of the iPhone 6 – including the release date, specs and price – have been leaked on Amazon Japan.

According to the listing, which has since been pulled but was captured by Load the Game, the device will launch on 30 September and will cost ¥139,999 SIM-free in Japan.

A 30 September release date would correlate with expectations that the iPhone 6 will be unveiled at an Apple event held on or around 19 September.

However, the accompanying pictures show two devices of varying sizes in black and charcoal grey. This lines up with two other iPhone 6 rumours: first, that Apple will be releasing two devices, a 4.5in or 4.7in iPhone and a 5.5in "iPhablet"; and second, like the iPhone 5s and iPhone 5c, they'll be available in a range of colours.

This wouldn't be the first time a product has leaked on Amazon ahead of its official unveiling. Details of the highly anticipated Mass Effect 4 video game, including price and platforms, were published on Amazon last month ahead of the expected launch later this year. BioWare confirmed the game's existence at E3 in early June, but no other details have been revealed.