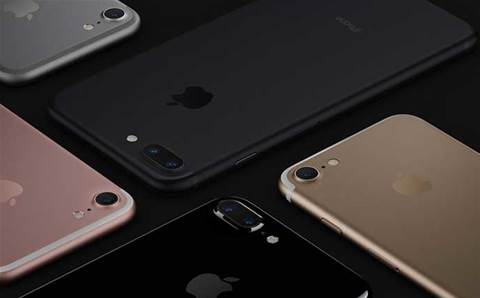 Shares of the world's most valuable listed company were down 1.2 percent at US$145.78 in after-hours trading.

The company boosted its capital return program by US$50 billion, increasing its share repurchase authorization by US$35 billion and raising its quarterly dividend by 10.5 percent.

Analysts on average had estimated iPhone sales of 52.27 million, according to financial data and analytics firm FactSet.

However, revenue from the smartphones rose 1.2 percent in the quarter.

Expectations are building ahead of Apple's 10th-anniversary iPhone range this fall, with investors hoping that the launch would help bolster sales.

A big jump in sales usually follows in the holiday quarter, before demand tapers over the next few quarters as customers hold back ahead of the next launch.

The company forecast total revenue of between US$43.5 billion and US$45.5 billion for the current quarter, while analysts on average were expecting US$45.60 billion, according to Thomson Reuters I/B/E/S.

Analysts on average expect the company to sell 42.31 million iPhones in the current quarter, according to FactSet.

Analysts on average had expected US$2.02 per share, according to Thomson Reuters I/B/E/S.

Revenue rose 4.6 percent to US$52.90 billion in the quarter, compared with analysts' average estimate of US$53.02 billion.

Apple's revenue from the Greater China region fell 14.1 percent to US$10.73 billion in the quarter, as cheaper rivals in the region chip away at sales.

A 17.5 percent jump in the company's services business - which includes the App Store, Apple Pay and iCloud - to US$7.04 billion boosted revenue.