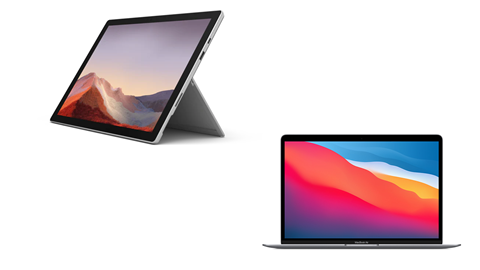 When Apple unveiled its new MacBook Air featuring the M1 chip, CEO Tim Cook touted the “Apple Silicon” processor as a way to make the already-popular laptop even better. The MacBook Air with M1 is “dramatically faster” and offers “extraordinary” battery life, Cook said at the time. Impressively, reviews of the MacBook Air have largely confirmed the claims. But there’s still plenty that the MacBook Air lacks, which you can find with top Windows 10 devices—such as Microsoft’s Surface Pro 7+. The 2-in-1 tablet is the latest edition of Microsoft’s productivity-focused Surface Pro series, and offers some obvious—and not-so-obvious—advantages over Apple’s new MacBook Air. For instance, for any user that wants a convertible device with a touch screen, the Surface Pro 7+ can deliver while the MacBook Air just cannot. Still, the performance results for Apple’s M1 processor vs. 11th-gen Intel chips—which power the Surface Pro 7+—are pretty stunning. It might be worth re-considering how badly you need that touch screen after all.

Which of these two devices—the new M1 MacBook Air or the Intel-powered Surface Pro 7+—is the better fit for you? In the following slides, we compare Apple’s MacBook Air (M1) vs Microsoft’s Surface Pro 7+ on specs and price.

Since the two displays are different sizes, it’s worth comparing them on pixels per inch (ppi) rather than overall resolution. By that comparison, the Surface Pro 7+ comes out ahead with resolution of 267 ppi vs the MacBook Air’s resolution of 227 ppi. Apple aims to compensate by adding support for P3 wide color on the new MacBook Air with M1—which provides a more “true-to-life” display experience, Apple said. The M1 MacBook Air is also brighter, at 500 nits, versus brightness of 395 nits on the Surface Pro 7+ display. 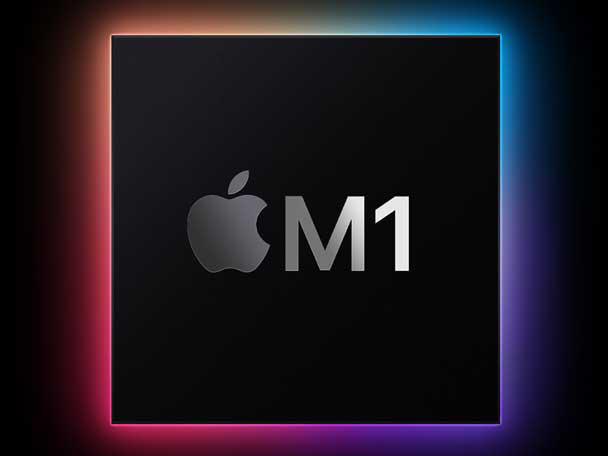 The latest MacBook Air is one of the first Macs to feature Apple’s high-performance, Arm-based M1 processor. For the MacBook Air, there are two options for the M1—a version that has a seven-core GPU or a variant with an eight-core GPU. Both versions have an eight-core CPU, consisting of four cores focused on demanding tasks and four cores that enable battery efficiency for less-intensive tasks.

Microsoft’s Surface Pro 7+ comes equipped with 11th-gen Intel Core processors. Choices include the Intel Core i3, i5 and i7—up to the Core i7-1185G7, a quad-core chip.

Benchmark scores point to a performance advantage for the MacBook Air with M1, even when it’s facing off with the top-tier Surface Pro 7+. Geekbench 5 scores for Intel’s Core i7-1185G7 and Apple’s M1 show the M1 coming out ahead in both single-core and multi-core benchmarks. The M1’s speed advantage should be most obvious on more-demanding, multi-core tasks, according to the Geekbench 5 results. Along with the versatility of the 2-in-1 detachable approach, Microsoft also touts the portability of the Surface Pro 7+. The company describes the Surface Pro 7+ as “ultra-light” with a starting weight of 1.7 pounds for the tablet only. Using the tablet with the Type Cover keyboard, however, adds about two-thirds of a pound to the weight—for a total starting weight of 2.38 pounds with the Type Cover. Still, while the MacBook Air originally got its branding from its lightweight design, the laptop is a noticeable amount heavier than the Surface Pro 7+, weighing in at 2.8 pounds. With its smaller display size, the Surface Pro 7+ is also smaller all-around, measuring 11.5 x 7.9 inches (91 square inches) compared to 11.97 x 8.36 inches (100 square inches) for the MacBook Air.

Thanks to the high-efficiency cores on the M1 chip, the MacBook Air does promise an advantage on battery life. Apple promises 18 hours of battery life for video playback on the M1-powered MacBook Air—the longest battery life ever offered for a MacBook Air model. But the Surface Pro 7+ doesn’t lag far behind, with Microsoft promising up to 15 hours of “typical device usage” over Wi-Fi for the device.

Notably, the M1-powered MacBook Air does not have a fan. The Core i3 and Core i5 models of the Surface Pro 7+ don’t have a fan, either, but the Core i7 model of the tablet does come with a fan. Two areas where the Surface Pro 7+ stands out are on ports and connectivity. The tablet is available as a variant that supports LTE Advanced connectivity—whereas the MacBook Air does not have any cellular connectivity options. The Surface Pro 7+ also has a bit more variety to offer on ports, with one USB-A port in addition to one USB-C port. The tablet offers a MicroSDXC card reader for the Wi-Fi-only model, or nano SIM for the LTE model, as well. The M1 MacBook Air only includes two ports—and both are USB-C / Thunderbolt.

Apple has not raised the starting pricing for the M1-powered MacBook Air, with the notebook continuing to be offered at a starting price of $1499. Microsoft’s Surface Pro 7+ currently has a starting price of $1249, but that pricing is for the tablet only. The Signature Type Cover costs $249.99, bringing the total price for the 2-in-1 device to just above the MacBook Air, at $1748. The two devices are thus very close on starting price—but it’s worth noting that this pricing for the Surface Pro 7+ only gets you the model with the Intel Core i3 chip, which is considerably slower than the M1. To get the model with the fastest available chip (and the closest to M1 on speed), you are going to pay at least $3998.95 with the Signature Type Cover. That complicates the comparison further, though, because that model of the Surface Pro 7+ comes with 16 GB of RAM and 256 GB of storage. To get a comparable MacBook Air with M1, you’d pay $2449—still considerably cheaper than the Surface Pro 7+.

Buyers will therefore have to decided whether the Surface Pro 7+ advantages around versatility, portability and touch screen capabilities—along with greater port selection—are worth that extra $1500. Especially when the performance and battery life are not quite up to par with that of the M1-powered MacBook Air.

If color choices are a factor, the MacBook Air does have more options there, with choices between Gold, Silver or Space Gray. The Surface Pro 7+ comes in two colors, Platinum or Matte Black.

Grabbing the hybrid cloud opportunity with Lenovo and Azure Services
By Kyle Alspach
May 24 2021
12:13PM