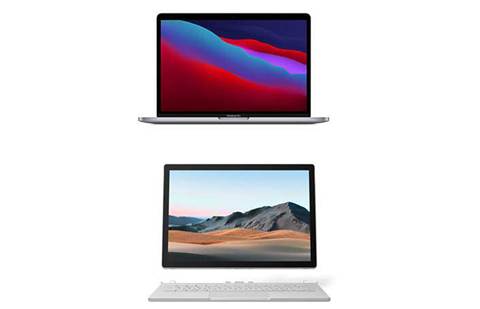 For any buyer looking to get a new laptop that is a true workhorse on performance, Apple’s MacBook Pro with the M1 chip and the Lenovo’s latest ThinkPad X1 Carbon (Gen 9) are two very solid options.

The new 13-inch MacBook Pro with M1 and the ThinkPad X1 Carbon with 11th-gen Intel Core processors both offer impressive speed and multi-tasking capabilities, along with strong battery life, portability and collaboration features.

But there are plenty of differences between the two high-performance laptops, too—starting with the operating system (macOS for the MacBook Pro and Windows 10 for the X1 Carbon), but also including the laptops’ display options, port variety and security.

Which of the two powerhouse laptops is right for your needs? What follows is our comparison of Apple’s MacBook Pro (M1) vs Lenovo’s ThinkPad X1 Carbon (Gen 9) on specs.

When it comes to the display size, the ThinkPad X1 Carbon has a slight advantage with its 14-inch screen, which makes it 5 percent larger than the 13.3-inch display on the MacBook Pro with M1.

The ninth-gen X1 Carbon also has a number of options to choose from for the display, whereas the new MacBook Pro has just one configuration—a vibrant Retina display that is non-touch, with resolution of 2,560 x 1,600 and brightness of 500 nits.

On security, in addition to the optional integrated privacy screen, the X1 Carbon also includes a human presence detection sensor that locks the X1 Carbon when you walk away. The laptop then automatically logs you back in (via Windows Hello facial recognition) when you return. Another new security feature for the latest X1 Carbon is the inclusion of an integrated fingerprint reader on the power button. The new MacBook Pro with M1 also includes a fingerprint reader for logging in, with a Touch ID sensor included on the keyboard. 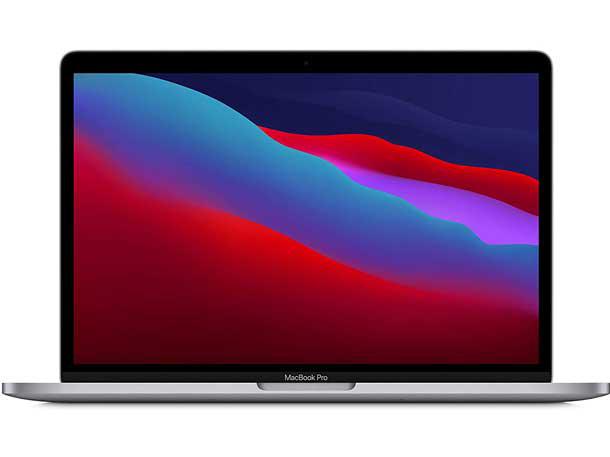 The 13-inch MacBook Pro is among the first devices to come equipped with Apple’s high-performance M1 processor. The M1 is an Arm-based chip featuring an eight-core CPU and an eight-core GPU. The eight-core CPU consists of four cores focused on offering strong performance for demanding tasks, along with four cores that enable battery efficiency for less-intensive tasks. Lenovo’s ThinkPad X1 Carbon is powered by quad-core, 11th-gen Intel Core processors. The notebook can be configured with a choice of four different processors—with two available Core i5 chip options and two available Core i7 options (up to the Core i7-1185G7).

Benchmark scores point to a performance advantage for the MacBook Pro with M1, even when it’s facing off with the top-tier X1 Carbon. Geekbench 5 scores for Intel’s Core i7-1185G7 and Apple’s M1 show the M1 coming out ahead in both single-core and multi-core benchmarks. The M1’s speed advantage should be most apparent on more demanding, multi-core tasks, according to the Geekbench 5 results. The new X1 Carbon includes a larger battery than the previous model, at 57 Whr, to enable battery life of up to 16 hours. While that’s an impressive figure, it’s still surpassed by the M1-powered MacBook Pro—with Apple promising up to 20 hours of battery life for the MacBook Pro with M1. That’s thanks in large part to the M1 itself, which includes four high-efficiency cores for conserving the battery.

With video and audio conferencing now a bigger focus for so many workers, Apple has outfitted the M1 MacBook Pro with several collaboration-friendly updates. These include the addition of a “studio-quality” array of three mics, along with Apple’s latest camera image signal processor—which enables sharper images and “more detail in shadows and highlights on video calls”—for the notebook’s 720p FaceTime HD camera, according to the company. The MacBook Pro also offers stereo speakers with support for Dolby Atmos playback.

The X1 Carbon also offers a 720p webcam (with a built-in privacy shutter), four far-field mics and Dolby Atmos speakers. Meanwhile, the notebook adds support for Dolby Voice, which optimises the performance of the notebook’s mics and speakers. Dolby Voice features include dynamic levelling, which automatically adapts to voices that are quieter or far away and provides noise suppression to limit background noises and echo. In terms of ports, the X1 Carbon offers greater variety than the MacBook Pro with M1, which features two Thunderbolt / USB-C ports only. By contrast, the X1 Carbon comes with two USB-A ports, two USB-C ports, HDMI and nano-SIM. Thus, buyers of the X1 Carbon are much less likely to need to carry around dongles for their connector needs.