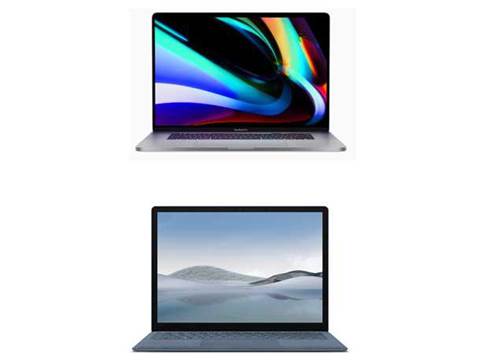 With the development of the M1 processor, Apple is seeking to make its laptops stand out--such as the latest 13-inch MacBook Pro. But they’re not the only device maker looking to use processors as a unique selling point. Microsoft, too, has emphasized the CPUs in their latest Surface device, the Surface Laptop 4. In that case, the Surface Laptop 4 offers a choice of processors from both Intel and AMD.

Both the new MacBook Pro with M1 and Surface Laptop 4 promise both strong performance and long battery life from using their respective processors. Other key updates on both laptops focus on enabling better audio and video conferencing collaboration, such as with enhanced webcams, speakers and mics. If getting a new laptop in 2021 has come down to a MacBook Pro vs Surface Laptop 4 decision, which of the two is the better fit for your needs?

In the following slides, we’ve compared the Apple MacBook Pro (M1) vs Microsoft’s Surface Laptop 4 on specs and price. 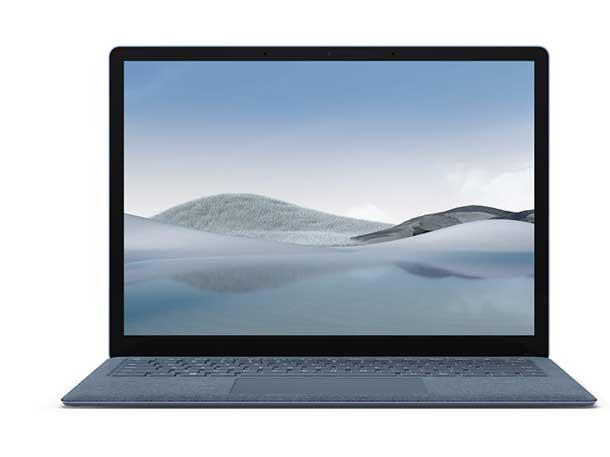 Apple’s entry-level 13-inch MacBook Pro is among the first three devices to come equipped with the high-performance M1 processor, which was unveiled in November. The M1 is an Arm-based chip featuring an eight-core CPU and an eight-core GPU.

As mentioned, the Surface Laptop 4 can be configured with processors from AMD in addition to Intel CPUs, a major difference from past Surface Laptop models. Notably, however, the AMD processor options are not from AMD’s latest Ryzen CPU lineup, the Ryzen 5000. Instead, the Surface Laptop 4 offers AMD Ryzen 4000 processors. The 15-inch Surface Book 4 AMD model comes with the Ryzen 7 4980U, while the 13.5-inch AMD model currently can be configured with the Ryzen 5 4680U. The AMD-powered models also feature AMD Radeon graphics.

But how does the Surface Laptop 4 compare on performance to the M1-powered MacBook Pro? One recent benchmark found only one 11th-gen Intel processor capable of beating the M1, the Core i9-11900K. And since the 11th-gen Intel processors found in the Surface Laptop 4 rank below that chip on speed—and the notebook opts for the previous generation of AMD Ryzen chips--it’s a safe bet that the M1-powered MacBook Pro will have a performance advantage in this comparison. The form factor on the Surface Laptop 4 will remain the same as on the third-gen model, though there is a new “ice blue” color being offered for the 13.5-inch model. Two keyboard finishes are also available on the 13.5-inch model-- Alcantara fabric or metal.

For the Alcantara model, the coloir options are platinum or ice blue, while the model with the metal keyboard finish is available in matte black or sandstone colours. The 15-inch model only offers platinum or matte black, and does not have an option for Alcantara fabric around the keyboard. In terms of collaboration features, Microsoft says it has upgraded the Surface Laptop 4 with a front-facing HD webcam, offering “incredible low-light capability.” The laptop also includes a “studio” microphone array, featuring dual mics, along with a speaker system that uses Dolby Atmos technology.

There are also some collaboration-friendly updates on the 13-inch MacBook Pro with M1. Those include the addition of a “studio-quality” array of three mics, along with Apple’s newest camera image signal processor--which enables “sharper images and more detail in shadows and highlights on video calls,” Apple said in a news release. The MacBook Pro offers stereo speakers with support for Dolby Atmos playback.

For the MacBook Pro battery life, it’s worth noting that the eight-core CPU on the M1 is made up of both high-performance cores for intensive computing needs, as well as high-efficiency cores for conserving battery life during less-intensive tasks. The result is the longest battery life of any Mac to date, according to Apple—with up to 20 hours of video playback available, doubling the previous promise of 10 hours for the MacBook Pro. Because this is the entry-level model of the 13-inch MacBook Pro, the notebook only includes two ports—and both are USB-C. That means getting used to owning dongles for converting from USB-C to other connector needs, such as USB-A or HDMI. The Surface Laptop 4 is only slightly better in terms of variety; while still only offering two ports in total, one is USB-C and the other is USB-A.

On storage, Apple continues to offer its 13-inch MacBook Pro with a base level of 256 GB of storage. There are three other storage configurations for the notebook, too--512 GB, 1 TB or 2 TB. The Surface Laptop 4 has nearly as many options, with the starting point on storage at 256 GB and other options consisting of 512 GB or 1 TB. The Surface Laptop 4 does stand out in one way on storage--the notebook’s solid-state drive is removable, for improved serviceability, while the MacBook Pro’s hard drive is not.