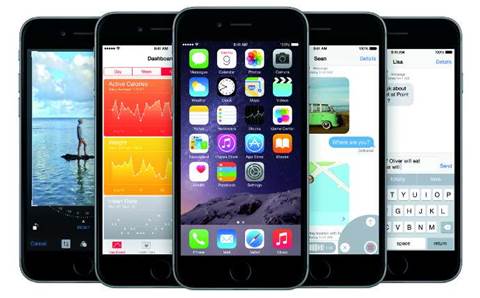 Apple painted a rosy picture for its new iPhones on Tuesday US time, but a sequential slowdown of overall sales in China cast doubt on the strength of its business in the world's most important market for smartphones.

Analysts on average had expected a profit of US$1.88 per share and revenue of US$51.11 billion.

Boosted by a new pink or 'rose gold' color option, Apple posted record sales of its latest iPhones in the first weekend that they hit stores in late September. The latest quarter only included two days of sales of the new iPhones.

The release of the iPhone 6 set off a sales frenzy last year, propelling Apple to the most profitable quarter ever for a US company.

Analyst Shannon Cross of Cross Research said Apple's guidance for the current quarter suggested the company can top its success last year. "It suggests that they are definitely up to the task," she said.

Apple's quarterly sales in Greater China nearly doubled from a year ago to $12.52 billion, accounting for nearly a fourth of its total revenue.

"We continue to have wonderful success there," chief financial officer Luca Maestri told Reuters, adding that Apple now has 25 stores in China and is opening a new one roughly every month.

But investors worried that China sales dipped from the quarter immediately before it, when Apple notched US$13.2 billion in revenue there. The sequential decline is important as many analysts believe China is poised to replace the United States as Apple's biggest market.

The world's largest company by market value said it sold about 48.05 million iPhones worldwide in its fiscal fourth quarter, slightly below analysts' average forecast of 48.72 million, according to a poll by Fortune magazine.

For the current quarter, which will include a full three months of sales of the new iPhone 6s and 6s Plus models, Apple forecast revenue between US$75.5 billion and US$77.5 billion. The company's generally conservative forecast was in line with Wall Street's average estimate of US$77.17 billion, according to Thomson Reuters I/B/E/S.

"The street was fearing soft guidance and instead got a good December outlook," said Daniel Ives, an analyst at FBR Capital Markets.

Morningstar analyst Brian Colello said the forecast was slightly below expectations but investors were pricing in a worse outcome, which was why the stock initially rose after hours.

Apple's shares, which fell steeply in mid-August as concerns about the company's business in China hit fever pitch, were trading at $114.80 after the bell.

Shares of the world's most profitable company initially rose after hours as Apple beat Wall Street's sales and profit forecasts, but gave up those gains later as concerns crept in.

(Reporting by Julia Love in San Francisco and Devika Krishna Kumar in Bengaluru; Editing by Kirti Pandey and Bill Rigby)