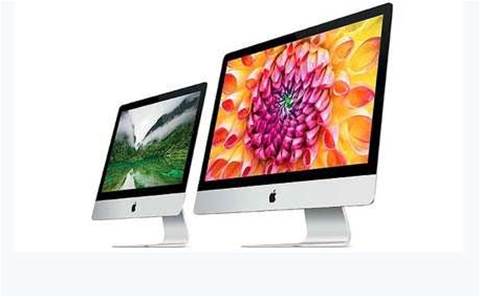 Apple has refreshed the iMac line, furnishing its 21.5in and 27in models with Intel's fourth generation Haswell processors, next-generation Wi-Fi and faster flash storage options.

Apple is touting speed boosts on the new iMac models, claiming up to a 40 percent faster graphics performance than previous models according to internal tests. It also says compatibility with 802.11ac Wi-Fi means up to three times faster wireless connections than older models, while PCIe-based flash storage means Fusion Drive is up to 50 percent faster.

Inside the cheapest 21.5in model, there's now a 2.7GHz quad-core i5 processor and Intel Iris Pro graphics. There's also 8GB of DDR3 memory, which can be expanded to 16GB, plus a 1TB hard drive which can be swapped for a 1TB Fusion Drive or up to 512GB flash storage. Prices start at $1,559 from Apple's site, including VAT.

The other 21.5in model starts at $1,849 and boasts a 2.9GHz quad-core i5 chip with a 6MB L3 cache, but can be upgraded to a 3.1GHz i7 processor. There's also an Nvidia GeForce GT 770 M graphics processor with 1GB of GDDR5 memory. Storage options are the same as for the cheaper model and prices start at $2,199 including VAT.

The cheapest 27in version comes with a 3.2GHz quad-core i5 processor and a 6MB L3 cache. It also comes with 8GB of DDR3 memory, configurable to 16GB or 32GB, plus four SO-DIMM slots accessible by the user. Again, there's a 1TB hard drive, which can be expanded to a 1TB or 3TB Fusion Drive or up to 1TB in flash storage. It comes with Nvidia's GeForce GT 755M graphics processor with 1GB of GDDR5 memory. Prices start at $2,199 including VAT.

Finally, the high-end 27in version comes with a 3.4GHz quad-core i5 chip with a 6MB L3 cache, which can be swapped for a 3.5GHz i7 processor. There's an Nvidia GeForce GTX 775M graphics processor, with 4GB of GDDR5 memory, which can be upgraded to GeForce GTX 780M processor. Storage configurations are again the same as the cheaper 27in model, and prices start from $2,499.

Eliminating departmental friction within MSPs
By Shona Ghosh
Sep 25 2013
8:11AM