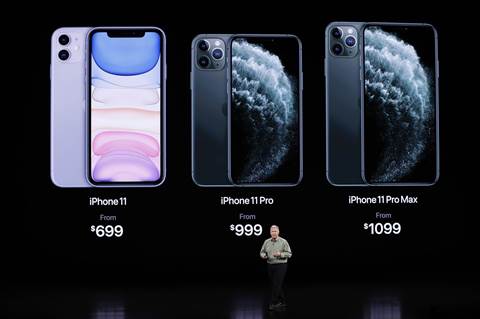 Apple has revealed a triple-camera iPhone, matching a feature rivals already have, and rolled out a streaming TV service priced to undercut Disney and Netflix.

The announcements came at the company's biggest marketing event, where it unveils its top products for the year ahead.

The long-awaited Apple TV+ streaming television service, which follows several false starts, will be available in over 100 countries, starting in November.

Buyers of an iPhone, iPad or Mac will get a free year of streaming television service, opening the service potentially to hundreds of millions of viewers. That catapults the new service into a rarified group of companies.

There was no bundle with Apple Music or other services as some analysts had expected.

Apple revealed that its new iPhone 11 will come with two back cameras, including an ultra wide-angle lens and the next generation of microchips, the A13. Prices start at $1199.

The more expensive iPhone 11 Pro will have three cameras on the back - wide angle, telephoto and ultra-wide. It can create videos with all three back cameras and the front camera at the same time and starts at $1749. The iPhone 11 Pro Max with a bigger screen starts at $1899. The new phones are available to order Friday and will start shipping 20 September.

Rivals including Huawei and Samsung already sell phones with three cameras on the back.

With only incremental updates to its phones, Apple is in a "holding pattern" until it rolls out 5G phones with faster mobile data speeds next year, analysts said.

IPhone sales have declined year-over-year for the past two fiscal quarters and investors are focused on the growth potential for services.

Apple's lower priced iPhones "aren't exciting on the surface, but the low streaming price may suck in the some new subscribers." He said lower prices for the older Apple Watch models could boost Apple's total user base by locking in users who buy it.

Grow your software revenue by selling these 5 affordable, essential tools for the modern workplace
By Stephen Nellis and Noel Randewich
Sep 11 2019
6:48AM