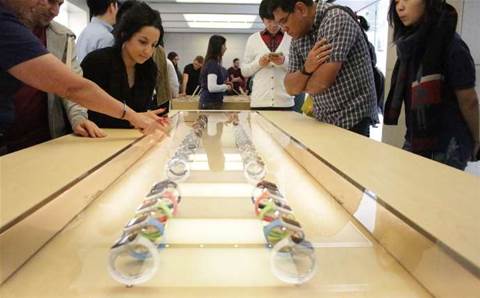 Apple is opening up distribution of its smartwatch to a limited channel of third-party retailers for the first time this week.

The Apple Watch will only be available in six stores on 15 August, with Harvey Norman Auburn, Doymane Bundall and JB Hi-Fi in Westfield Sydney getting the Apple Watch. Myer will stock the Apple Watch in three of its stores in Melbourne, Sydney and Brisbane.

They will sell the regular Apple Watch and Sport models. The high-end Apple Watch Edition – which costs $14,000 to $24,000 – remains exclusive to Apple stores and online purchasing.

Customers will be able to purchase devices in-store at the third-party retailers. When Apple released the Watch four months ago, it could only be bought online. It was later made available in Apple stores as initial demand slowed down.

Customers can also book an appointment to try on a watch in-store at the chosen retailers before purchasing.

In a Q3 earnings call, Apple CEO Tim Cook said the vendor was expanding distribution to get ahead of the holiday season. While Apple won’t reveal how many watches have been sold, recent estimates suggests it could be around 2.8 million as of June.